[Editor’s update–I first posted this article one year after establishing ThereAreNoSunglasses website in July, 2008, so I had not yet figured-out the need, nor the best methods to highlight quotations, given for references in the analysis I was presenting to you, the readers…my apologies…Blind Dumb Luck, or the Highest Connections? was one such research piece, mostly of my own.  But the primary reference source given to explain that the “slant-drilling” operation by Dick Cheney’s Halliburton from Kuwait into Iraqi Gas fields thereby directly causing the Gulf War came from one source–“How the USA created the Gulf crisis“

Extract from The Cruellest Hoax, by Kirsten Cale, 30 April 1991

I have been wanting to write this article since the start of the first Gulf War, but until the government gave us the Internet, that was impossible. I want to thank the eggheads in the government who thought that giving the people access to this powerful intelligence tool was a good idea.

The story revolves around an old Texaco refinery in southern Illinois, where I was working at the time. While doing research on this refinery and the pre-war timeline, I uncovered some fairly convincing circumstantial evidence which suggests that the Bush Administration had foreknowledge of the war with Iraq and quite possibly implicates Halliburton in causing that war.  (Sperry-sun provided the subterranean guidance to “unbalanced drills” that probably slant-drilled into Iraq‘s Rumaila field.  Kuwaiti oil reservoirs and production shot through the roof in 1990, provoking Saddam to act.)

In 1989 and 1990 I traveled all over the eastern US, working for a cooling tower repair company, out of New Jersey. The first job that the company sent me to was in 1988, to United Refinery, in Warren, Pa.

It seemed like everywhere we went that next spring we passed long convoys of Army trucks, all packed full of soldiers. This went-on throughout the summer, culminating in a spectacular display of practice bombing runs by F16s on the old Indian (Texaco) refinery in Lawrenceville, Illinois in late July. 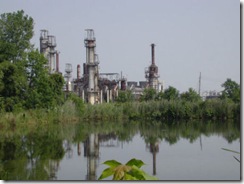 The shut-down Indian Refinery was being brought out of mothballs by the same wealthy investor who had recently purchased parent company United Refinery. With uncanny, almost clairvoyant insight, the new owner, John Catsimatidis (presently challenging Bloomburg for Mayor of New York), invested $7.5 million in the two refineries at a point in time where the oil market had bottomed out.

It was almost as if the new owner had some hot tip, or insider connections that let him know that the demand for increased American refinery capacity was about to go through the roof.

The research led me to the inescapable conclusion that the man had some very serious connections and potentially even had access to the very highest “insider” information which said very clearly, invest in oil refining.

John and George became acquaintances around 1988, when Catsimatidis was heading the Chapel Building Committee for Camp David. This photo and this statement are taken from John’s website. As far as I could see, this is the only publicly known connection, although Catsimatidis is a very public friend of the Clintons.

United Refining (owned by United Acquisitions, which was owned by the Red Apple Group, owned by Catsimatidis) was able to bring Indian Refinery online because of some sort of environmental waivers, it was a Superfund clean-up site (the reason Texaco had shut it down). United purchased the Illinois site out of bankruptcy proceedings, involving previous investors who had tried to purchase the site from Star Enterprises (a merger of Texaco’s assets in eastern US and Saudi Aramco). The Warren refinery received another federal environmental waiver in 2001, allowing it to claim economic “hardship,” letting the company ignore federal sulfur standards in the fuel it sells.

This information seemed to confirm my original suspicions about this seemingly serendipitous nature of this investment gamble. The excitement in the air over the cooling towers of Indian Refinery is the peculiarity that tends to cement my suspicions about government connections and foreknowledge. Around the 15th of July, 1990, we started seeing daily practice bombing runs carried-out by F16s on the cooling tower we were working on. For several days, we were the anticipated “enemy,” as we were strafed with imaginary bullets, over and over.

Surely, such a potentially hazardous targeting of an American refinery required the consent of the site’s owner, or at least the knowledge on the part of the government that the owner would look the other way, barring some catastrophic accident. Two plus two (foreknowledge and compliance) smelled like “four,” four being the symbolic “rat” in the equation.

The events of that summer, culminating in Saddam Hussein’s Aug. 2 invasion of Kuwait, were pregnant with other suspicious clues that the Bush Administration and many of their oil company friends knew firsthand that there was a military/economic storm set to tear through the Middle East and then wash over the world stage.

On February 8, 1990: General Schwarzkopf Warned Congress on the Importance of Middle East Oil, saying in testimony before the Senate Committee on Armed Services:

“Middle East oil is the West’s lifeblood. It fuels us today and being 77 percent of the Free World’s proven oil reserves, is going to fuel us when the rest of the world has run dry…. Our allies are even more dependent on Middle East oil. Japan gets almost two-thirds of its oil from the area while our allies in Europe import over one quarter.”

[The following section from How the USA created the Gulf crisis, by Kirsten Cale]

In February 1990, the Washington Centre for Strategic and International Studies advised Saddam to adopt a more aggressive stance in OPEC, and demand lower oil output and higher prices to offset Iraq’s economic problems. The Americans suggested a target price of $25 a barrel, even though they knew that this proposal was bound to increase tensions with Kuwait, a low-cost, high-quota oil producer. The Iraqis took the American advice, and when Iraqi minister Saddoun Hammadi demanded higher prices in July, he proposed $25 a barrel. Sure enough, the Kuwaitis protested, precipitating rows over oil quotas and prices which culminated in the Iraqi invasion. In a meeting with the US charge d’affaires Joseph Wilson on 5 August 1990, days after the invasion, Saddam told the Americans You did this. We accepted $25 a barrel.

Lead elements of the 800th and 143rd Military Police Battalion began mobilizing in January, shipping-out for Saudi Arabia in early February. They began preparations for an anticipated 100,000 Iraqi prisoners of war. Toreador Sword, taking place in late June, or early July, was a rehearsal where specialists in intra-prison psychological warfare (for control and indoctrination) from the 13th Psychological Operations Battalion joined the MPs, where they practiced setting-up and running two large EPW camps at Ft. A. P. Hill in Virginia.

Internal Look followed on the heels of “Toreador Sword 90,”

(The 800th MP Brigade, out of Long Island, is notorious for Abu Gharib. )

Just like the second terror attacks of 9/11 and 7/7, the Gulf war began right in the middle of war games, which were actually rehearsing the exact scenario that was being practiced:

“As the exercise unfolded, the real-world movements of Iraq’s air and ground forces eerily paralleled the scripted scenario of the war game. So closely did actual intelligence reports resemble the fictional exercise messages, the latter had to be prominently stamped ‘Exercise Only.’ During the last few days of INTERNAL LOOK, Saddam Hussein’s forces invaded and captured Kuwait on 2 August 1990.”

This compilation of multiple incriminating facts causes one to ponder whether the infamous Iraqi oil field maps presented to Cheney’s oil task force weren’t produced for the first gulf war, dusted-off and reused, as well.