[The big question concerning the heart of the following story, as recently expressed by AfPak Amb. Holbrooke, is: Will US moves against Iran at the UN make pipeline projects which benefit Iran economically illegal?  If the answer is yes, then will either Pakistan or India be willing to go against international treaty law, to obtain Iranian gas?  SEE: UN Iranian Sanctions Will Bend Pipeline Nations To America’s Will]

Iran to India: Energy alliance between South and Central Asia 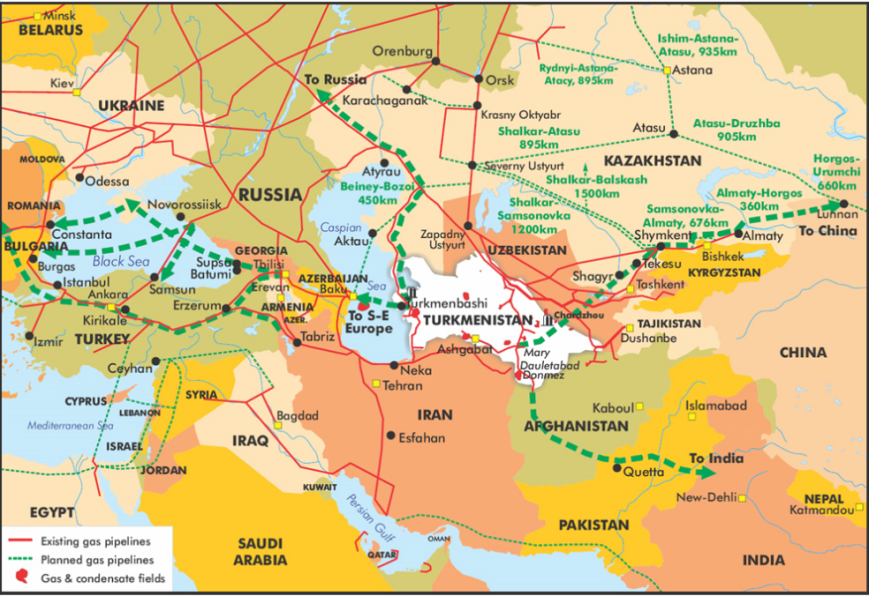 [thanks to Let Us Build Pakistan for the map]

Pakistan and India both face energy shortages but this crisis can be turned into a huge opportunity if (and there is big if) India and Pakistan are able to form an alliance that also includes Iran and the Central Asian republics. The driving force behind the alliance between South and Central Asia should be energy.

The United States and the European Union (EU) are likely to oppose such an alliance because their eyes are on the Iranian and Central Asian energy resources. The EU, in particular, needs oil and gas from Central Asia because of its land connectivity with Central Asia. Nearly 25 per cent of the EU gas imports are from Russia.

Pakistan and India are home to more than one billion people and therefore the demand for energy is very high in the both countries. Neighboring China also requires tremendous amount of energy to keep its economic growth. China is already importing energy from Central Asia.

Western policy makers fear that if most of the Central Asian and Iranian energy resources are diverted to China and the Indian Sub-continent, the West can be deprived from alternate sources of energy thus the Western opposition to the eastward export of Iranian and Central Asian energy is understandable. NATO’s continuing occupation of Afghanistan may have a link with energy exports. Perhaps, energy is also one of the causes of the West’s troubles with Iran.

By playing energy politics the West is protecting its interests. India, Iran and Pakistan or China should also defend their interests. The easiest way to export oil and gas from Central Asia to India and Pakistan is through Afghanistan. Iranian gas can also reach to India via Pakistan and Afghanistan.

The landmark gas pipeline agreement between Tehran and Islamabad is a great achievement for the power stricken Pakistan but it should be the beginning of a long journey. The US objections to the project are hypocritical and are part of the US vicious agenda against Iran.

Currently, the energy-hungry India is vigorously building relations with Central Asian states to gain direct access to Central Asian energy resources. India wants to do it alone and is focusing on possibilities of opening land routes that bypass Pakistan. Reopening of the ancient Silk Road through China’s Xinjiang region is one option for Indian policy makers. The second possibility is the development of North-South Corridor or road through Iran and Afghanistan.

Nevertheless, the most feasible route for energy imports to India from the former Soviet republics is through Afghanistan and Pakistan. India can also export its products to Central Asian markets using the same route but the main constraint for India’s access to Central Asia via Pakistan is hostility between India and Pakistan and instability in Afghanistan.

India’s energy demands are growing fast. It is one of the largest importers of energy resources in the world. By the end of 2010, India’s oil requirements are expected to exceed three million barrels per day. India also needs gas imports as consumption of gas is growing very rapidly in the country. Currently, 70 percent of India’s crude oil and gas demands are met by imports from the Persian Gulf states but to maintain stable economic growth India needs additional and smooth supplies of oil and gas. Central Asia can offer India an opportunity to meet its energy needs at a comparatively lower price but access to cheaper energy resources of land-locked Central Asia is problematic.
However, the energy crisis is more serious in Pakistan.

Power cuts have crippled Pakistan’s economy and the country’s 180 million people are suffering. Pakistan can import cheap electricity from Tajikistan and it can also utilize Central Asian technical expertise in different forms of power generation. Pakistan can import oil and gas products from Kazakhstan and Turkmenistan and even from Russia using the Afghan route. But so far Pakistan has not been able to take the strategic advantage that it has for building relations with Central Asia.
Pakistan was hostile towards the Soviet Union during the Cold War. In the post Cold War years, the Pakistani military has destroyed any goodwill, left in Central Asia for Pakistan, by supporting the Taliban and exporting militancy.

Since the removal of the Taliban regime, India has been developing relations with Kabul but unfortunately New Delhi seems to be more interested in using Afghanistan as a base against Pakistan.
India enjoys warm and friendly relations with Central Asian countries; however, it cannot fully utilize the benefits of these relations and meet its energy demands without land transport connectivity with Central Asia. For that it needs Pakistan.

This year work on Western Europe-Western China International Transport Corridor (WEWCITC) will start. It is a mega project that will link Asia with Europe. The total length of the Corridor will be 8,445 Kilometers. Out of which 2,787-kilometre road will pass through Kazakhstan. The construction of WEWCITC corridor has opened employment opportunities for Indians as the Indian embassy in Kazakhstan has successfully secured jobs for hundreds of Indian engineers, specialists, builders and workers, who will be working on this project. India hopes that, once completed, the WEWCITC will enable India to reach Eurasian markets.

In the meantime, Indian businesses are entering Central Asian markets. Several Indian drug manufactures have begun making products. According to Ashok Sajjanhar, the Indian Ambassador to Kazakhstan, India will be doing business with Kazakhstan’s national nuclear energy company KazAtomProm, and India’s Punjab Bank has acquired a controlling stake in Kazakhstan’s Danabank. Sajjanhar said other Indian businesses want to invest in such sectors of the Kazakhstan economy as agriculture, food production, petrochemicals, information technology, railways and highways.

However, India’s interest in Central Asia is energy driven. In Central Asia, Kazakhstan is a major player in the energy sector. China and India, the two rapidly growing Asian economies, are looking at Kazakhstan as a possible source of their future energy requirements. Kazakhstan’s estimated extractable resources of oil are 7.8 billion tons. Most of Kazakhstan’s reserves are located in the western regions of the country, including the reserves of standard fuel in the Caspian Sea. Experts believe that the Caspian Sea shelf may have much larger oil and gas reserves than previous estimations. That is why the U.S, the EU as well as China and Russia all have stakes in Kazakhstan and they have been competing for influence in Kazakhstan.

India and Pakistan also want to tap into Turkmen gas through a proposed Turkmenistan-Afghanistan-Pakistan-India (TAPI) gas pipeline but this project has been delayed several times due to diplomatic rows and political instability in Afghanistan and Pakistan. An alternate to the TAPI project for India is to import gas from Turkmenistan via Iran instead of Afghanistan. But India’s new warm and friendly relations with the United States can be an obstacle in New Delhi’s search for energy, especially from Iran.

Smooth access to cheaper energy sources of Central Asia is a must for India, but in doing so India has to build bridges with its neighbors. India cannot import oil or gas from Central Asia without transit facilities through China or Pakistan.

One land route that can connect India with Central Asia through China is slightly less than 3000 kilometers. It can link Kazakhstan’s city of Almaty to India via the Lepu-lekh Pass in Uttarakhand in India. But harsh weather conditions and difficult terrain up in the Lepu-lekh region make it a difficult choice.

Another short route from Central Asia to India can be through Ladakh in Jammu & Kashmir but it is unlikely to work on this route due to the political situation in Kashmir and territorial and diplomatic disputes over the Kashmir region.

In comparison to the above routes, a passage to India via the Khyber Pass could be cheaper and it makes sense because for centuries Central Asian traders and invaders had used the Khyber Pass to reach India.

Central Asia has been a source of war and destruction for the people of the Indian Sub-Continent. During the last 1,000 years, India was invaded and was subject to the loot and plunder of Central Asian worriers. But the 21st century offers different opportunities to forget painful memories and heal the past wounds.

Opening of trade routes and energy transport between Central Asia and South Asia through Afghanistan and Iran can bring an economic revolution in the lives of millions in Afghanistan, Iran, Pakistan and India. The region needs peace and the growth of trade and business can be a path to peace and prosperity. Mutual trade may create a win-win situation for all the parties—Afghanistan, Iran, Pakistan, India and the Central Asian countries– in terms of economic and social development.

For the last 30 years, Afghanistan and Pakistan have turned into war zones. If land trade and energy routes between South and Central Asia open, Afghanistan and Pakistan will make considerable revenues from transit fees. Construction and developmental work on and along the transport infrastructures will create employment opportunities for hundreds and thousands of people. New cross-country businesses will flourish. Such opportunities and possibilities may offer a second chance to war-hit people of the region. Iran which has been cornered by the West can feel strong again. These a development can eliminate dependence on Western aid and can reduce poverty. Consequently, the whole region can be self-sufficient and thus more independent. It will be a new beginning for the people South and Central Asian.

Shiraz Paracha is an international journalist. His email address is: shiraz_paracha@hotmail.com