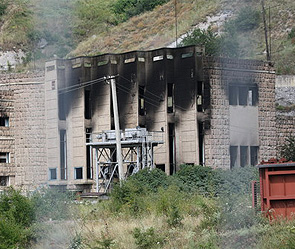 Four in the circle

The persons who could perform a loud attack on Kabardino-Balkaria HES previously killing two guards and seizing their weapons, defined. National Anti-Terrorist Committee will now search for specific suspects, and calls on citizens to help him in this. Meanwhile, CP resulted in enhanced security measures at all waterworks southern Russia.

“To date, the list of suspects ( in the attack on the Baksan HPS ) is defined “, – stated in the National Anti-Terrorist Committee (NAC), Russia, circulated on Wednesday morning.

“We can already conclude that the literacy activities of this station staff, who promptly stopped the generators’

The Committee lists a sequence of events that led to a breach of hydropower. “On Wednesday, about 05.00 Moscow time, unknown persons of up to four people had committed an armed attack on the Baksan hydroelectric power station. Having shot two employees of private security and mastering their weapons, the attackers broke into the computer room, beaten three workers and laid the improvised explosive devices, and then disappeared “- leads the Interfax NAK message.At 5.20 and 6.00 as a result of explosions at HPS failure were withdrawn three generators and other technical equipment. In the engine room caught fire. At 6.15, the work station has been temporarily suspended.

In the NAC noted that the scene were sent to the strength and resources of the territorial units of the FSB, the Interior Ministry and the Ministry of Emergencies of Russia. As highlighted in the communication department, emergency incident did not lead to restriction of supply to customers and socially significant objects in the Kabardino-Balkaria, which is carried by substituted channels.

We made every effort to apprehend criminals. As directed by the NAC in Kabardino-Balkaria and established an operational headquarters, which “coordinates the activities of rapid response of the security and police forces on the organization of complex administrative regime and search operations, identify the persons involved in the incident and the search for criminals,” noted in the Information Centre Committee.In connection with that happend at the Russian hydro taken special security measures “at all waterworks southern Russia have taken measures to strengthen the protection of energy supply, – said in a statement NAC. – Organs of state power situation in the zone a disaster control.

Anti-terrorist Committee encourages citizens “to provide necessary assistance to the security and the security forces in the aftermath of an accident and wanted criminals.”

According to the newspaper SIGHT, on Wednesday morning were eroded Baksan hydroelectric power station, located on the eponymous river in Kabardino-Balkaria. “July 21, 2010 in 5 hours and 25 minutes in the Baksan hydroelectric heard an explosion. As a result, suffered machine room “, – said in a message on the site of the company “RusHydro, which operates the hydroelectric plant.”According to preliminary information, the cause of the explosion and fire was a terrorist attack killed two guards, two people were hospitalized. Damage received only hydroelectric turbine room “- the company noted.

The representative of the investigation department of the Investigative Committee at the RF Prosecutor’s Office reported that the explosion was four. “According to preliminary data, in the engine room Baksan hydroelectric power station exploded four bombs, one was found and defused,” – he told Interfax.

Now closures GES open, water is discharged idle. However, threats to the population is not represented: “In the Baksan hydroelectric dams are not high pressure, as, for example, at the Sayan-Shushenskaya station and derivational. Even in the event of damage serious threats to the population would not have “- told” Interfax “an unnamed industry expert. In RusHydro also assured that there is no danger of flooding.The amount of damages specified. According to RIA Novosti , the leadership “RusHydro flies at the Baksan hydroelectric station to assess the damage and the formation of schedule recovery station. “We can already conclude that the literacy activities of this station staff, who promptly stopped the generators, closed gates at the penstock and opened a blank spillway”, – said the representative of the company.

Law enforcement agencies of the North Caucasus region, which have already begun an investigation into the incident, believed to have operated an organized subversive and terrorist group of the bandit underground. “The scheme of the attack indicates that this is a well-planned sabotage and terrorist operations”, – said, in particular, one of the representatives of law enforcement.

Baksan hydroelectric power station was built in 1930-1936 years on the refined plan of electrification, according to a report RusHydro. The first unit of capacity 8300 kW was put into operation on Sept. 20, 1936. Station laid the foundation for the development of hydropower of the CBD, the formation of energy systems of the Republic and Stavropol Territory.

Installed power station, which is part of the Kabardino-Balkaria branch of JSC “RusHydro”, – 25 MW (the power of the Sayan-Shushenskaya GES (SSHGES) before the accident was 250 times higher). Kabardino-Balkar HPP is small.