[At least Obama understands that the majority of the American people are ashamed by the many wars we are waging, enough so that he tries to hide the real aggression, relying on CIA and covert means to propagate new wars.  Romney is proud of American wars in perpetuity.  He thinks that the main problem with Obama is that he is not aggressive enough in committing new war crimes.  Romney acts as if our terror war is something to take great pride in, rather than being repulsed by the criminality of it all.  If there truly is a God, then there will be a special “Hitlers’ corner” of Hell for all of the American war criminals, even the ones who consider themselves to be “Special Operators.”

There can be no pride in what we have done or in the things that we still have planned.  If there are still any real Christians left among the American military, then they will repent of their part in the war crimes and lay-down their weapons, to join the awakening on the path to war resistance.] 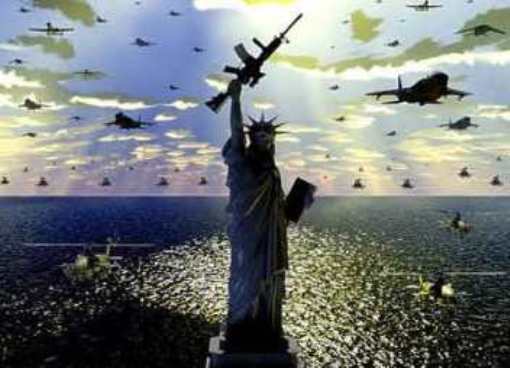 On October 1, 2012, Presidential hopeful Mitt Romneyoutlined his own version of imperialist American foreign policy before the Virginia Military Institute. What Romney described was, in its goals, no different than that of any other President since JFK.

As was made clear in his speech, the presentation of the mutated Manifest Destiny to be ushered in by Romney would be significantly more open than the “leading from behind” destabilization and coalition-based Obama treachery, as the candidate has clearly stated this on more than one occasion.

Essentially, while Obama has continued and accelerated every disastrous policy of the Bush Administration, Romney has openly announced his intention to do the same. The only difference is that the Romney doctrine will supplant the deceitful, secretive, and treacherous nature of Obama’s foreign policy for a more ham-fisted and brazenly aggressive position.

However, while the latter option is reminiscent of George W. Bush’s Iraq adventure, the fact is Romney’s presentation of American imperialism will no doubt be more cleverly constructed using the threat against “American interests” and “our friends and allies” as justification.

In his speech, Romney stated,

If America does not lead, others will, others who do not share our interests and our values – and the world will grow darker, for our friends and for us. I am running for president because I believe the leader of the free world has a duty, to our citizens, and to our friends everywhere, to use America’s great influence – wisely, with solemnity and without false pride, but also firmly and actively – to shape events in ways that secure our interests, further our values, prevent conflict and make the world better – not perfect, but better.

Romney’s plan thus echoes yet more of the “American Exceptionalism” that has been used as a cover for imperialist ventures for decades. It is, after all, an illusion that the majority of the American people have bought in to after years of movies, television, and related propaganda.

In this regard, Romney could scarcely be more clear (a rarity) as to what plans he holds for the United States military should he be elected. For instance, he stated, “It is the responsibility of our president to use America’s great power to shape history – not to lead from behind, leaving our destiny at the mercy of events. Unfortunately, that is exactly where we find ourselves in the Middle East under President Obama.”

Aside from the obvious falsity of Romney’s political jockeying regarding “where we find ourselves in the Middle East,” the Republican candidate’s statement seems to offer a brief representation of yet more American Exceptionalism, an even more warped version of Manifest Destiny, and the Freemasonic doctrine of directing nature and controlling the Force of the people.

Of course, the United States is no passive player in the Middle East under Barack Obama. Indeed, even the casual observer should be aware that the United States, along with other Anglo-American NATO powers has directed and controlled the Arab Spring and destabilization of Middle Eastern countries.

However, because of the Obama Administration’s penchant for “leading from behind” and directing the overthrow of sovereign governments via intelligence networks, pawning, destabilization efforts, or coalition-based “kinetic military action,” the talking heads on the Conservative Right are able to play upon the wasteland of the average American mind and subsequently propagandize that the Obama/Brzezinski method exemplifies weakness. The Neo-Con method, being more upfront, aggressive, and direct – is unfortunately the only presentation simple enough to capture the average American attention span and is understood as strength.

Thus, the Romney campaign does not criticize the Obama Administration for waging wars against Islam, sovereign nations, state-owned banks, or secular governments – its criticisms are that it does not do so in a faster, more aggressive manner.

A perfect example of both the political posturing and of the identical nature of both candidates and their respective parties can easily be seen in terms of the Syrian destabilization, itself directed by the Anglo-American, NATO forces in order to weaken and provoke the Iranians and the Russians, implement a system of privatized central banks, exploit the people and resources of Syria, and ignite the subsequent third world war that must inevitably follow.

In this regard, Romney firmly stated in Virginia that he will arm al-Qaeda forces operating inside Syria and will help them “to obtain the arms they need to defeat Assad’s tanks, helicopters and fighter jets.” Of course, Obama is already arming the Syrian terrorists, but the vast majority of Americans are completely oblivious to this fact (as they are to the fact that the “rebels” are actually fanatic terrorists) so the issue exists as a prime opportunity for political grandstanding.

Of course, no Romney foreign policy speech would be complete without some measure of beating the drums for war against Iran.

In regards to Iran, Romney stated, “we must make clear to Iran through actions – not just words – that their nuclear pursuit will not be tolerated.” He also committed to tighten sanctions and “restore the permanent presence of aircraft carrier task forces in both the Eastern Mediterranean and the Gulf region.” Romney said he would allow no “daylight” between the United States and Israel.

Like the references to war with Iran, it appears that no Romney speech will be complete without reference to the relationship between Israel and the United States and how American foreign policy might be outsourced to the colonial state of Israel.

While many Americans are still caught in the trap of voting for one of the two political parties (which are only different branches of the same tree), more and more are becoming aware of the fact that Presidents and Presidential candidates are nothing more than puppets and tools.

To suggest that these hapless and damaged individuals hold any true sway over the direction of the country in real life, regardless of their potential to do so, would be optimistic to say the least.

With this in mind, it is important to take a look at those individuals doing some of the legwork for the foreign policy presented through the two-sided mouth of Mitt Romney.

Indeed, it is particularly revelatory that many of Romney’s advisers are not only members of organizations like theCouncil on Foreign Relations but also of Neo-Con think tanks like the Project for A New American Century[1] of 9/11 fame. Specifically, Romney Foreign Policy advisers such as Eliot Cohen, Robert Kagan, John Lehman, Vin Weber, and top adviser Dov Zakheim are all members of PNAC.

Thus, with so many direct connections to an organization like PNAC (among many others), it is much more clear as to why the Romney rhetoric sounds so familiar to what we heard for eight years under the Bush Administration.

Nevertheless, as I wrote in my article “Romney’s Foreign Policy Advisers Exposed As Globalists,”

Considering Romney’s attendance at the 2012 Bilderberg meeting and the apparent tendency of the elite in leaning to Romney as the next president, it is imperative that those who are aware of the forces truly guiding the United States and the rest of the world be prepared to shift gears, even if it is only temporary, and begin to expose Mitt Romney as the criminal globalist that he is.

Still, we must guard against being played like a tennis ball and rushing back into the arms of “Bush on steroids” Barack Obama. Unless we become significantly more streetwise than the general public has been in the past, the condition of the world will only continue to degenerate with every election, regardless of the results.

Below is a list of Mitt Romney’s foreign policy advisers complete with lists to many, but not all, of their groups, organizations, and affiliations that should be the focus of much concern.

Cofer Black; torture architect; Blackwater; Central Intelligence Agency; Department of State Coordinator for Counter-terrorism; Total Intelligence Solutions; CIA case officer in Zambia during the Rhodesian Bush War and Somalia during the Ethiopian/Somalian conflict; CIA officer in South Africa during the conflict between South African government and “anti-apartheid militias;” CIA officer in Zaire where he helped armed “anti-communist guerrillas” in Angola; CIA Station Chief in Sudan in 1993, the same time Osama bin Laden was allegedly located there; CIA agent in Afghanistan in 1998, at the same time Osama bin Laden was allegedly there; CIA Task Force Chief in the Near East and South Asia Division; Deputy Chief of the CIA Latin America Division; Director of the Counter Terrorism Center (position held on 9/11); well-known for having withheld important information regarding the alleged 9/11 hijackers; Department of State’s Ambassador At Large;

Robert Joseph; U.S. Chief Negotiator to Libya in 2003 (regarding nuclear weapons), National Institute for Public Policy (NeoCon Think Tank), Center For Security Policy (Pro-Israel Think Tank);Rumored to have been responsible for the Iraq-WMD-Niger claims circulated by the Bush Administration.

One thought on “Romney More Blatantly “Bush” Than Either George”