[The Saudis can’t afford to take-on the Iranian Republican Guard, but they can afford to hire Turkey to do it for them.  That seems to be the conclusion in the Jewish think tank report cited in the Iranian report below.]

BAMIYAN, Afghanistan: In a spectacular valley swept by centuries of Silk Road history, the hopes and fears of Afghanistan’s only female governor capture the mood across the country as Western troops prepare to withdraw.

Russia to Keep Silo and Mobile ICBM Launchers in Future

The two-component structure of the SMF reflects its purpose as part of Russia’s nuclear triad. Silo-based ICBMs serve as a preventive nuclear deterrent of any potential aggression while road-mobile ICBM launchers ensure the capability to respond to nuclear strikes by potential foes.

“This SMF structure will most likely remain unchanged for years or even decades to come,” Mazurov said in an interview with Rossiya 24 television.

“The composition of ICBM systems [in SMF structure] is based on a thorough analysis of potential military conflicts of varied intensity that involve the use of nuclear weapons,” the general said.

The SMF said last year that the Topol-M and RS-24 ballistic missiles would be the mainstay of the ground-based component of Russia’s nuclear triad and would account for no less than 80 percent of the SMF’s arsenal by 2016. 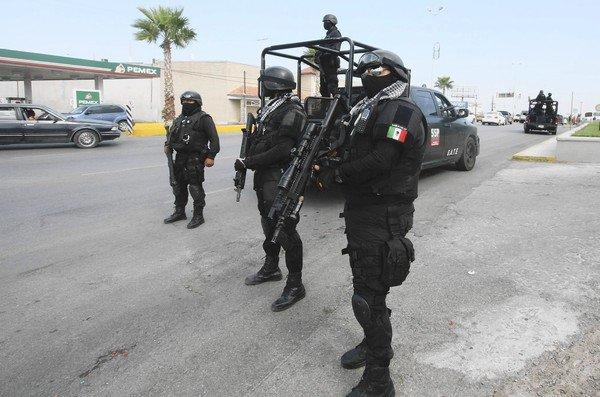 Coahuila state police guard a checkpoint in the city of Piedras Negras in September after a prison break staged by the Zetas cartel in the northern Mexican state. (Adriana Alvarado, Associated Press/ September 18, 2012)

The aggressively expanding Zetas took advantage of three things in this state right across the border from Texas: rampant political corruption, an intimidated and silent public, and, if new statements by the former governor are to be believed, a complicit and profiting segment of the business elite. It took scarcely three years.

What happened to Coahuila has been replicated in several Mexican states — not just the violent ones that get the most attention, but others that have more quietly succumbed to cartel domination. Their tragedies cast Mexico’s security situation and democratic strength in a much darker light than is usually acknowledged by government officials who have been waging a war against the drug gangs for six years.

“We are a people under siege, and it is a region-wide problem,” said Raul Vera, the Roman Catholic bishop of Coahuila. A violence once limited to a small corner of the state has now spread in ways few imagined, he said.

What sets the Zetas apart from other cartels, in addition to a gruesome brutality designed to terrorize, is their determination to dominate territory by controlling all aspects of local criminal businesses.

Not content to simply smuggle drugs through a region, the Zetas move in, confront every local crime boss in charge of contraband, pirated CDs, prostitution, street drug sales and after-hour clubs, and announce that they are taking over. The locals have to comply or risk death.

And so it was in Coahuila. One common threat from Zeta extortionists, according to Saltillo businessmen: a thousand pesos, or three fingers.

With the Zetas meeting little resistance, wheels greased by a corrupt local government, there was little violence. But the people of Coahuila found themselves under the yoke of a vicious cartel nonetheless.

“It was as if it all fell from the sky to the Earth,” said Eduardo Calderon, a psychologist who works with migrants, many of whom have been killed in the conflict. “We all knew it was happening, but it was as if it happened in silence.”

The “silence” ended in rapid-fire succession in a few weeks’ time starting mid-September. Coahuila saw one of the biggest mass prison breaks in history, staged by Zetas to free Zetas; the killing of the son of one of the country’s most prominent political families (a police chief is the top suspect); and, on Oct. 7, the apparent slaying of the Zetas’ top leader by federal troops who say they stumbled upon him as he watched a baseball game.

“Apparent” because armed commandos brazenly stole the body from local authorities within hours of the shooting. The military insists that the dead man was Heriberto Lazcano, Mexico’s most feared fugitive, acknowledging that he had been living comfortably and freely in Coahuila for some time.

“He was like Pedro in his house,” former Gov. Humberto Moreira said, using an expression that means he was totally at home and could go anywhere.

The Zetas had such confident dominion over the state that Lazcano, alias the Executioner, and the other top Zeta leader, Miguel Angel Trevino, regularly used a vast Coahuila game reserve to hunt zebras they imported from Africa.

Since their formation in the late 1990s and early 2000s as a paramilitary bodyguard for the then-dominant Gulf cartel, the Zetas operated primarily in Tamaulipas state on Mexico’s northeastern shoulder and down the coast of Veracruz and into Guatemala.

For most of that time, Coahuila, rich in coal mines and with a booming auto industry, was used by cartels as little more than a transit route for drugs across the border. The Zetas maintained a presence limited to Torreon, the southwestern Coahuila city that served as a bulwark against the powerful Sinaloa cartel that reigned in neighboring Durango state.

In 2010, the Zetas broke away from the Gulf cartel, triggering a war that bloodied much of Tamaulipas and spilled over into neighboring states. Coahuila, with its rugged mountains and sparsely populated tracts, became a refuge for the Zetas, and they spread out across the state, including this heretofore calm capital, Saltillo.

Even if the violence hasn’t been as ghastly as in other parts of Mexico, nearly 300 people, many of them professionals, have vanished in Coahuila, probably kidnapped by the Zetas for ransom or for their skills.

The man in charge of Coahuila during most of the Zeta takeover was Moreira, the former governor. After five years in office, he left the position a year ahead of schedule, in early 2011, to assume the national leadership of the Institutional Revolutionary Party on the eve of its triumphant return to presidential power after more than a decade.

But scandal followed Moreira, including a debt of more than $3 million he had saddled Coahuila with, allegedly from fraudulent loans. He was eventually forced to quit the PRI leadership, dashing what many thought to be his presidential aspirations.

Tragedy followed when Moreira’s son Jose Eduardo was shot twice in the head execution-style in the Coahuila town of Acuna early last month. Investigators believe that most of the Acuna police department turned Jose Eduardo over to the Zetas as a reprisal for the killing of a nephew of Trevino. The police chief was arrested.

Memoirs Of Mr. Hempher, The British Spy To The Middle East is the title of a document that was published in series (episodes) in the German paper Spiegel and later on in a prominent French paper. A Lebanese doctor translated the document to the Arabic language and from there on it was translated to English and other languages. Waqf Ikhlas publications put out and circulated the document in English in hard copy and electronically under the title: Confessions of a British spy and British enmity against Islam.

In this narrative Hempher, tells a tale for his instrumental role in founding the conservative Islamic reform movement of Wahhabism. The Stratigies to Contain islam through Tampering and Also invention of False Superficial Religion , and to Further its Goals of Great Game this Salafist Wahibism was Used to make further Inroad in Form of Deobandi , Barelevis and Even Qadiani Movement in India too .

The book has been denounced by Wahhabi Muslims and called an “imaginary fictional narrative, coined deliberately to discredit” Muhammad ibn Abd-al-Wahhab “and his followers by the British”

by Mr. Hempher Member of British Intelligence and Ministry of Colonies