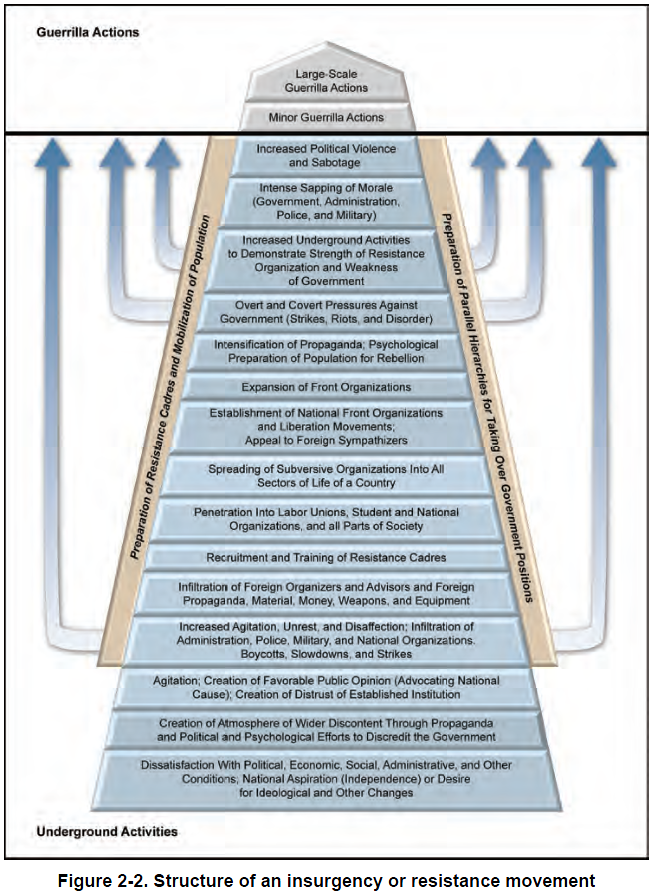 1-2. Enabling a resistance movement or insurgency entails the development of an underground and guerrilla forces, as well as supporting auxiliaries for each of these elements. Resistance movements or insurgencies always have an underground element. The armed component of these groups is the guerrilla force and is only present if the resistance transitions to conflict. The combined effects of two interrelated lines of effort largely generate the end result of a UW campaign. The efforts are armed conflict and subversion. Forces conduct armed conflict, normally in the form of guerrilla warfare, against the security apparatus of the host nation (HN) or occupying military.  Conflict also includes operations that attack and degrade enemy morale, organizational cohesion, and operational effectiveness and separate the enemy from the population. Over time, these attacks degrade the ability of the HN or occupying military to project military power and exert control over the population.  Subversion undermines the power of the government or occupying element by portraying it as incapable of effective governance to the population.

1-31. While determining the feasibility of a potential campaign, planning personnel must have clear objectives, a desired end state, and knowledge of exactly what level of support is available and acceptable.  Without these specifics, negotiations with potential resistance forces are futile. If planners determine conditions are unfavorable during the assessment, then they need to consider any measures that could transform the current situation into a more favorable one. For example, can the United States—
 Persuade a potential resistance group to cease unacceptable tactics or behavior?
 Persuade a coalition to accept a specific resistance group’s participation under certain
conditions?
 Degrade the enemy’s control over the population?
 Bolster the will of the population to resist?
 Achieve desired objectives within the given time constraints?

1-33. Planners need to be careful of attempting to overcome a potential resistance shortcoming by creating surrogate forces that are not indigenous. Historically, the United States has not had success creating and transplanting these types of resistance forces to the operations environment without an existing clandestine infrastructure that connects the local population to the foreign forces.

1-36. UW forces can function as effective instruments in the psychological preparation of the population for the introduction of conventional forces. Furthermore, deception and other measures can convince enemy leaders to divert resources away from the main area of effort when it is not necessary to do so.