Remnants of a three bus convoy.  [There is no safety in numbers, this only provides bigger targets.]

According to initial reports, a suicide bomber struck into a passenger bus which was carrying Shia pilgrims from Iran and going to Quetta. The incident took place in Drainghar township of Mastung District.

The blast damaged two buses which were carrying Shia pilgrims and were on their way to Quetta. More than twenty passengers were injured in the attack. The injured people were immediately shifted to hospitals in Mastung and Quetta while ambulances reached the spot to assist the remaining injured people.

Authorities said they were investigating the attack and it seemed to be a sectarian assault. In the past, a Sunni militant group called the Lashkar-e-Jhangvi had been claiming responsibility for such attacks on Shia Muslims.

One of the passenger buses was completely damaged while the other remained partially damaged.

Note: We are constantly updating this report. More details to follow

Published in The Baloch Hal 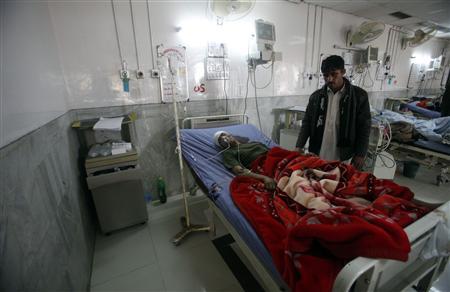 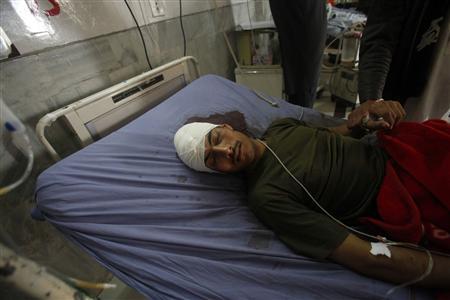 The lone survivor of the attack

(Reuters) – Pakistani militants, who have escalated attacks in recent weeks, killed at least 41 people in two separate incidents, officials said on Sunday, challenging assertions that military offensives have broken the back of hardline Islamist groups.

The United States has long pressured nuclear-armed ally Pakistan to crack down harder on both homegrown militants groups such as the Taliban and others which are based on its soil and attack Western forces in Afghanistan.

In the north, 21 men working for a government-backed paramilitary force were executed overnight after they were kidnapped last week, a provincial official said.

Twenty Shi’ite pilgrims died and 24 were wounded, meanwhile, when a car bomb targeted their bus convoy as it headed toward the Iranian border in the southwest, a doctor said.

New York-based Human Rights Watch has noted more than 320 Shias killed this year in Pakistan and said attacks were on the rise. It said the government’s failure to catch or prosecute attackers suggested it was “indifferent” to the killings.

Pakistan, seen as critical to U.S. efforts to stabilize the region before NATO forces withdraw from Afghanistan by the end of 2014, denies allegations that it supports militant groups like the Afghan Taliban and Haqqani network.

At home, it faces a variety of highly lethal militant groups that carry out suicide bombings, attack police and military facilities and launch sectarian attacks like the one on the bus in the southwest.

Witnesses said a blast targeted their three buses as they were overtaking a car about 60 km (35 miles) west of Quetta, capital of sparsely populated Baluchistan province.

“The bus next to us caught on fire immediately,” said pilgrim Hussein Ali, 60. “We tried to save our companions, but were driven back by the intensity of the heat.”

Twenty people had been killed and 24 wounded, said an official at Mastung district hospital.

International attention has focused on al Qaeda and the Pakistani Taliban.

But Pakistani intelligence officials say extremist Sunni groups, lead by Lashkar-e-Jhangvi (LeJ) are emerging as a major destabilizing force in a campaign designed to topple the government.

Their strategy now, the officials say, is to carry out attacks on Shi’ites to create the kind of sectarian tensions that pushed countries like Iraq to the brink of civil war.

As elections scheduled for next year approach, Pakistanis will be asking what sort of progress their leaders have made in the fight against militancy and a host of other issues, such as poverty, official corruption and chronic power cuts.

Pakistan’s Taliban have carried out a series of recent bold attacks, as military officials point to what they say is a power struggle in the group’s leadership revolving around whether it should ease attacks on the Pakistani state and join groups fighting U.S.-led forces in Afghanistan.

The Taliban denies a rift exists among its leaders.

In the attack in the northwest, officials said they had found the bodies of 21 men kidnapped from their checkpoints outside the provincial capital of Peshawar on Thursday. The men were executed one by one.

“They were tied up and blindfolded,” Naveed Anwar, a senior administration official, said by telephone.

“They were lined up and shot in the head,” said Habibullah Arif, another local official, also by telephone.

One man was shot and seriously wounded but survived, the officials said. He was in critical condition and being treated at a local hospital. Another had escaped before the shootings.

“We killed all the kidnapped men after a council of senior clerics gave a verdict for their execution. We didn’t make any demand for their release because we don’t spare any prisoners who are caught during fighting,” he said.

The powerful military has clawed back territory from the Taliban, but the kidnap and executions underline the insurgents’ ability to mount high-profile, deadly attacks in major cities.

This month, suicide bombers attacked Peshawar’s airport on December 15 and a bomb killed a senior Pashtun nationalist politician and eight other people at a rally on December 22.

ISLAMABAD, Dec. 30 (Xinhua) — Pakistan Taliban have killed 21 security personnel kidnapped by them during an attack on a checkpoint in NW Pakistan several days ago, reported local media Geo on Sunday.

The dead bodies of the killed have been found in the Hassan Khel area near Peshawar, said the report, adding that all of them were shot dead.

Pakistan Taliban have claimed responsibility for the killing of the 21 kidnapped security personnel, it said.

The policy of ‘fielding’ these non-state actors against the foreign policy initiative at lessening tensions in the region is riddled with bad faith. PHOTO: FILE

Khyber-Pakhtunkhwa Chief Minister Amir Haider Hoti says Pakistan should undertake “do-or-die” action against terrorists who “want to destroy our state and society” from their sanctuaries inside the country. His words challenge the state of Pakistan:

“We are on the defensive in our streets and alleys, and they (terrorists) are at ease in their sanctuaries. We should evolve a national consensus on a comprehensive strategy for defeating terrorist outfits. We appeal to all political parties to take a clear stand on this issue (terrorism). If the experience of the recent past is anything to go by, terrorists will not forgive any political or religious party, even those who have literally acted as supporters of terrorists and apologists. It will be an exercise in futility to appease terrorists”.

Party chief Asfandyar Wali Khan has tried to rationalise the anti-drone policy his party was compelled to back, to be inside the national consensus against America, built inside parliament in Islamabad: he opposes the drones — because they violate the sovereignty of the state — at the same time as he opposes the continuation of Taliban sanctuaries in the ‘ungoverned spaces’ of the country. The fact is that the US is retreating on the drones and may ultimately face internal American objection to them, while the Taliban flourish not only in their sanctuaries in the Tribal Areas but also in big cities inside the ‘governed spaces’.

Pakistan does not have a credible policy on the Taliban. Its approach is riddled with contradictions. The Pakistan Army, which ‘guides’ the foreign policy enclave in Islamabad, says it is not ready to challenge the sanctuaries. The world — including the 42 states that sent their troops to Afghanistan under Chapter Seven of the UN resolution — wants to help Pakistan in its confrontation with terror. But the strategy evolving in Pakistan is more focused on the situation inside Afghanistan where India is seen as a security challenge amid still-unproved allegations that the Baloch insurgency is orchestrated by New Delhi. Meanwhile, terror has moulded the attitude of the political parties who should have persuaded the army against its dangerously isolationist mindset: they want to make concessions to an entity that is actually planning a ‘revolutionary’ takeover of a nuclear-armed state.

The ANP is targeted because it contests Pakhtun nationalism with the predominantly Pakhtun Taliban on the basis of Pakhtunwali. The Swat trauma proved to the Pakhtun nation that terror can tame the tribal spirit and that the pain of seeing their sons killed can persuade the people to obey all kinds of commands. The terrorists use a policy of positive discrimination to command the direction of politics in Pakistan: they will not target those who favour ‘talks’ rather than ‘action’ vis-à-vis Tehreek-e-Taliban Pakistan. Their latest message clearly exempts parties that are friendly to the Taliban on the basis of the logic that terror is emanating from a reaction to the American presence in the region and that being anti-American will appease the terrorists.

The Taliban are not alone in their sanctuaries. Their support among the erstwhile ‘non-state actors’ trained by the state of Pakistan, in al Qaeda camps in Afghanistan, as instruments of foreign policy, riding on asymmetrical warfare is deep seated and growing. The so-called Punjabi Taliban are terror’s foot soldiers, produced by our madrassa network in support of privatisation of war on the basis of their doctrine of jihad. The policy of ‘fielding’ these non-state actors against the foreign policy initiative at lessening tensions in the region is riddled with bad faith.

The ANP’s cry from the heart will resound in 2013 when things get worse for Pakistan. But Pakistan’s isolationism — concealed behind rabid anti-Americanism — will not allow other political parties to rally around the ANP and confront the most palpable threat to the existence of the country. The Pakistan Army can take on the Taliban but it will need international help. The capacity of the state to cope with terror is at its lowest ebb.

Just some good ole boys from our pals in the terrorist Mujahedin-e Khalq Organization (MKO), checking-out US Secretary of State Hilary Clinton ‘s ass, and she is loving the bad boy attention.

“Truly known to be one of the most misinterpreted and misused words, terrorism is defined and refined by the West according to the context where it proves deleterious or beneficial to those who define the term,” Ismail Salami wrote in an article published by Press TV.

The MKO was taken off the State Department’s blacklist on September 28.

The MKO fled to Iraq in 1986, where it enjoyed the support of Iraq’s executed dictator Saddam Hussein, and set up its camp near the Iranian border.

Out of the 17,000 Iranians killed in terrorist attacks since the victory of the Islamic Revolution in 1979, 12,000 of them have fallen victim to the acts of terror carried out by the MKO.

Salami added that the US State Department cited the group’s lack of involvement in terrorist acts for a decade while solid evidence suggests that they have been complicit in the assassination of Iranian nuclear scientists in the last few years in Iran.

Referring to the establishment of al-Qaeda by the US and CIA in the seventies in an attempt to counter the influence of the former Soviet Union, Salami said the terrorist group is “sowing seeds of blind extremism and religious sectarianism in the world.”

“This CIA-created Frankenstein’s monster has not changed for the better but has grown up monstrously,” the Iranian academic said.

Salami stated that dichotomization of ‘terrorists’ into good and bad is far uglier than any form of apartheid, though “a comparatively similar story is being repeated in Syria.”

The analyst noted that while supporting most terrorist groups in Syria, Washington has branded the Qatar-funded Al-Nusra Front as a terrorist organization because the group to a large extent flies in the face of Washington’s policies in Syria.

“Terrorism is terrorism and it cannot be defined otherwise unless the interests of one party tilt the scale in disfavor of another and the dichotomization of the terrorists in Syria into good and bad by the West casts doubt on its claim on democracy,” Salami concluded.