Pakistan Taliban ‘sets up a base in Syria’

The Pakistani Taliban have visited Syria to set up a base and to assess “the needs of the jihad”, a Taliban official has told the BBC.

He said that the base was set up with the assistance of ex-Afghan fighters of Middle Eastern origin who have moved to Syria in recent years.

At least 12 experts in warfare and information technology had gone to Syria in the last two months, he said.

Their presence in the country is likely to have a sectarian motive.

Taliban factions feel that Sunni Muslims, who constitute a majority in Syria, are being oppressed by Syria’s predominantly Shia rulers.

Thousands of people have died in the year-long armed conflict in Syria between loyalists of the ruling Baath Party and those who want to overthrow it.

The Pakistani government has not commented on the allegations.

Mohammad Amin, a senior Taliban operative and “co-ordinator of the Syrian base”, told the BBC that the cell to monitor “the jihad” in Syria was set up six months ago.

He said that the cell has the approval of militant factions both within and outside of the Tehrik-e-Taliban Pakistan (TTP), an umbrella organisation of militant groups fighting the Pakistani forces.

The cell sends “information and feedback” on the conflict in Syria back to Pakistan, he said,

“They were facilitated by our friends in Syria who have previously been fighting in Afghanistan,” Mr Amin said.

Their job is to “assess the needs of the Jihad in Syria, and to work out joint operations with our Syrian friends”.

“There are dozens of Pakistani hopefuls in line to join the fighting against the Syrian army, but the advice we are getting at the moment is that there’s already enough manpower in Syria.”

In the past, militant fighters from Pakistan have often gone to fight in Central Asia and the Balkans.

In the 1990s, militant group Harkatul Mujahideen, was known to have sent a large number of men to fight in the Bosnian civil war of 1992-95.

Many Afghan and Pakistani fighters also fought on the side of Azerbaijan in the Nagorno-Karabakh conflict of 1988-94.

A number of Taliban groups in Pakistan have sectarian leanings, and resent the rule of Syrian President Bashar al-Assad – having a Shia background – over Sunni Muslims who constitute about three-quarters of the Syrian population.

Sources say that anti-Shia groups in Pakistan have access to considerable charity funds raised in some Middle Eastern sheikhdoms that see their domestic Shia populations as a problem. 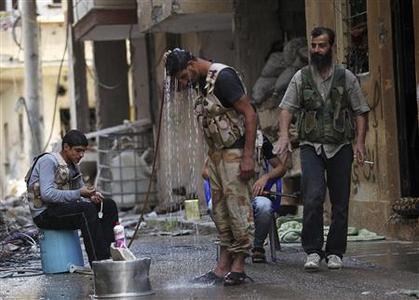 (Reuters) – Syrian rebels said on Friday the assassination of one of their top commanders by al Qaeda-linked militants was tantamount to a declaration of war, opening a new front for the Western-backed fighters struggling against President Bashar al-Assad’s forces.

Rivalries have been growing between the Free Syrian Army (FSA) and the Islamists, whose smaller but more effective forces control most of the rebel-held parts of northern Syria more than two years after pro-democracy protests became an uprising.

“We will not let them get away with it because they want to target us,” a senior FSA commander said on condition of anonymity after members of the Islamic State of Iraq and Levant killed Kamal Hamami on Thursday.

“We are going to wipe the floor with them,” he said.

Hamami, also known by his nom de guerre, Abu Bassir al-Ladkani, is one of the top 30 figures on the FSA’s Supreme Military Command. His killing highlights how the West’s vision of a future, democratic Syria is unravelling.

Assad appeared close to defeat a year ago when rebels killed top officials in a bomb attack and pushed deep into Damascus.

Now, with military and financial support from Russia and Iran, he has pushed the rebels back to the outskirts of the capital and put them on the defensive in the south while radical Islamists assert control over the north.

The FSA commander said the al Qaeda-linked militants had warned FSA rebels that there was “no place” for them where Hamami was killed in Latakia province, a northern rural region of Syria bordering Turkey where Islamist groups are powerful.

Other opposition sources said the killing followed a dispute between Hamami’s forces and the Islamic State over control of a strategic checkpoint in Latakia and would lead to fighting.

The two sides have previously fought together from time to time, but the Western and Arab-backed FSA, desperate for greater firepower, has recently tried to distance itself to allay U.S. fears any arms it might supply could reach al Qaeda.

He said a fighter who was travelling with them was set free to rely the message that the Islamic State considers the FSA heretics and that the Supreme Command is now an al Qaeda target.

“If these people came to defend the Syrian revolution and not help the Assad regime, then they have to hand over the killers,” Mekdad said, adding that the bodies of the two men were still with the al Qaeda affiliate.

The FSA has been trying to build a logistics network and reinforce its presence across Syria as the U.S. administration considers sending weapons, in part to present a bulwark against units it considers “terrorist organisations.”

But with funding from Gulf-based individuals, Islamist brigades have taken a leading role in rebel-held regions of Syria, filling the vacuum of power by setting up religious courts and governance bodies.

The FSA — a mixture of loosely-affiliated brigades — is accused by locals of looting and has not been able to present a unified front to sideline hardline units who favour an Islamic caliphate over pluralist democracy.

Some frustrated FSA fighters say they have joined Islamist groups and moderate and hardline fighters sometimes buy and sell weapons from each other.

The anti-Assad Syrian Observatory for Human Rights, which monitors the conflict, said the FSA and the Islamic State have had violent exchanges in several areas of Syria over the past few weeks, showing growing antagonism between Assad’s foes.

“Last Friday, the Islamic State killed an FSA rebel in Idlib province and cut his head off. There have been attacks in many provinces,” the Observatory’s leader Rami Abdelrahman said.

Syria’s conflict turned violent in the face of a crackdown on protests. Civil war ensued with disparate rebel groups taking up arms and the Observatory says more than 100,000 people have been killed.

U.S. congressional committees are holding up plans to arm the rebels because of fears that such deliveries will not be decisive and the arms might end up in the hands of Islamist militants.

Syria’s opposition bemoans the delay, and repeated on Thursday assurances that the arms will not go to Islamist militants.

(Reporting by Oliver Holmes and Mariam Karouny in Beirut, Khaled Yacoub Oweis in Amman and Diana Bartz in Washington; editing by Philippa Fletcher)

[Next the sadistic bastards will be trying to convince us that KSM invented the ultimate Toll House Cookie recipe, or that he took-up needlepoint between sessions, while the waterboarding experience elevated him to the tenth level of Nirvana.  There are some people who really believe that near-death experiences are good for the soul and that they would be glad to hold some unruly person under water (SEE: Pediatrician Waterboards Eleven-Year Old Daughter To Make Her A Better Person, By Simulating “Near Death Experience” ).]

[SEE:   Waging War Upon Ourselves]

The British Empire of Altaf Hussain–MQM

Police in London are investigating one of Pakistan’s biggest political parties, the Muttahida Quami Movement (MQM) for possible money-laundering. The BBC understands that in raids on MQM-owned properties in London, police found hundreds of thousands of dollars of unaccounted-for cash.

The party’s leader is Altaf Hussain, who lives in London in self-imposed exile. Officers are also investigating complaints alleging that Mr Hussain used his base in the UK to incite violence in Pakistan.

The party denies the allegations that murders in Pakistan were ordered from London and says it is the victim of “malicious” propaganda. It declined to comment about the money-laundering investigation while police inquiries continue and stressed no arrests have been made.

Muttahida Quami Movement (MQM) categorically stands against all sorts of terrorism, religious fanaticism and violence, and favours genuine democracy.
We can provide the following:
1. Many demonstrations in Karachi in favour of the International Community combating terrorism within five days notices after this agreement being signed, putting hundreds of people on the streets of Karachi (providing the permission of the Government of Pakistan is secured). First demonstration is scheduled for 26th September 2001 in Karachi, the port city of Pakistan.
2. Provide unlimited resources for humint (human intelligence) throughout the towns and villages in province Sindh and the province of Punjab to some extent, to monitor the activities of “Madrassas” (religious Schools).
3. To ensure select groups to penetrate Afghanistan in the form of aid workers so as to enhance the Western Agencies intelligence information capabilities.
In return for this assistance, we would seek assurances to achieve the following minimum objectives, which would be held essential for ourselves and for the good of Pakistan as a whole. Our objectives are as follows:
a) Equitable participation in the governance of the province of Sindh and the Federation as partners genuinely.
b) Equitable participation in all spheres of life, including education, employment, army and administration.
c) That we would need local policing consisting of Mohajirs and Sindhis
d) That full autonomy be granted to the provinces with Federation keeping only three subjects: Defence, Foreign Affairs and Currency control, and in these sections equal representation from all provinces be granted.
e) ISI (Inter Services Intelligence Agency) the secret agency must be disbanded otherwise the ISI will continue to produce Osama-bin Ladens and Talibans in future.
I hope that you would be kind enough to seriously consider my offer for the benefit of Pakistan, should any geo-strategic and commercial relevance of Pakistan left for the United Kingdom and the International Community.
Looking forward to hear from you soon
With best wishes and warmest regards