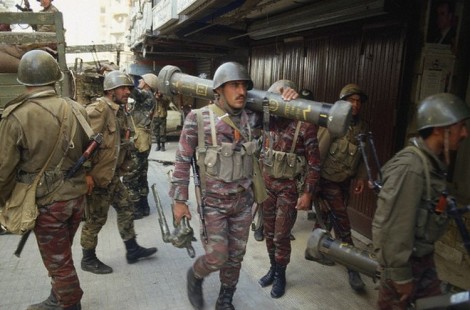 The Arleigh Burke-class destroyers have on board up to 90 Tomahawk cruise missiles (TLAM) and submarine attack on Los Angeles class – 40, are not new to the Syrian army. Neither the strategic bombers B-52, which may take 20 Tomahawks (CALCM), 8 rotary launchers (there are only 8 to reduce fuel consumption) and 6 under the wings. Or that cruise missile has in memory a predetermined trajectory, the missile once released, can not be changed. Cruise missiles can be launched in salvo, but only one at a time from each destroyer and submarine (by wave of cruise missiles 5-15), the distance between them is at least 20 to 30 km . This is a safety device to prevent midair collisions.

The next wave of cruise missiles can be launched only after the first 15-20 minutes. Experience shows that less than 5-10% of cruise missiles immediately after launch, suffer from technical failure. This is why the missiles are followed accurately within the first 50-70 km by radar ship launch, and if there is more than ± 15 ° relative to the path difference inscribed in his memory, the control of destruct is triggered.

The distance between the destroyers, submarines and bombers launchers Tomahawks and objectives in Syria is covered from one hour 45 minutes to two hours. The time available is sufficient for the commanders of the air force and the Syrian defense AA to calculate with high accuracy the most probable that each Tomahawk will fly from the shore area and when. And the commanders of the Syrian Air Force will establish for each launched Tomahawk, 3-4 air service areas spread successively from an advanced Mediterranean alignment. In these air service areas are sent planes most powerful fighter with the most optimal and controlled for these purposes by the best crews Syrians equipment. There are many implementation details of a very fine, and in the planning of this flawless mission critical to the Syrian army, which, for understandable reasons, I decline to address.

For several decades, the Russian pilots serving in fighter aircraft have been trained in the procedures to intercept and destroy cruise missiles, each running at least four annual live-fire exercises in the polygon of Astrakhan on airplanes without reagents driver perfectly simulate the flight profile of the Tomahawks. Under an agreement between Nicolae Ceausescu and Kremlin officials, a rotation of two groups of 24 Romanian fighter pilots, trained to shoot down cruise missiles were tested until 1991, day and night, fire actual on air targets flying at low altitude in the polygon Astrakhan. In the last years of the Ceausescu era, Romania bought the Soviets a squadron of planes without VR-3 pilot type whose speed maneuverability and flight altitude are identical to those of the Tomahawk. Their primary mission is aerial reconnaissance and, secondarily, they used to train fighter pilots and batteries AA missiles in proceedings attack cruise missiles. For political reasons in 1995, the VR-3 had stopped flying and were then removed from the endowment. Romanian fighter pilots have ever done since 1991 until today, no real exercise to intercept air targets. With time and generational change, they all lost their skills attack cruise missiles.

During the Gulf War of 1991, the United States launched 35 CALCM and 288 TLAM, and military aggression of NATO against Yugoslavia in 1999, 60 and 150 CALCM TLAM were launched. While fighter pilots had reasonable capacity nor the Iraqis nor the Yugoslav pilots had been trained in the recognition and attack cruise missiles during the night and did not know their path and time of launch . So they were not able to detect and shoot down cruise missiles. If the Russians decide to spend the operating time, the coordinates of the launch and management of each cruise missiles launched by the United States, the probability for the Syrian army to slaughter will be close to 50%. This percentage may increase or tend to zero immediately, depending on the professional competence coupled with the calm displayed by the Syrian military leadership and training of pilots and commanders of batteries AA missiles in this type of mission.

The Syrian Air Force has 60 MiG-29 36 which are M/M2 and SMT versions of which have been installed equipment KOLS / OEPS-29 category (IRST search and target tracking in infrared), the rest are MiG-29 C, which have a S-31E2, less effective. OEPS-29 is based on a sensor mounted in the nose to detect air targets, independently of the operation of the radar. In the opposite hemisphere it detects distant targets 12 to 18, and up to 50 km in the rear hemisphere. In tests, in perfect weather, cooled with liquid nitrogen, OEPS-29 sensor has detected an air target 90 kilometers.

The infrared sensor is coupled to a microprocessor which controls the sweep of the airspace as a radar antenna (within ± 60 ° to the left and right and 60/-15 ° elevation). OEPS-29 is a passive receiver operation is not detected and can not be countered by interference.

One can conclude from the above that, at least in theory, the Syrians have enough time to intercept and shoot down by their own aviation tomahawks launched by the Americans. It remains to show that they want and it is up to managers to do so.

The Syrian army has the ability to fend off waves of Tomahawks launched by the U.S.. Part 2/2 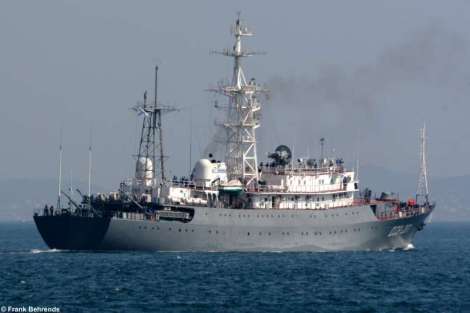 No reaction missile batteries and AA artillery of the Syrian army can not be understated, although Tomahawk cruise missiles are almost invisible on their radar.The device seems staged fight in the territory sectors and separate alignments.

It should be noted that the fire control stations for missile batteries and AA artillery of the Syrian army have a main channel with detection radar and guidance and an electro-optical channel. Older AA systems rely on a mundane camera 9Sh38/83-2 Karat, the thermal emission sensors mounted atop a mast 21 m

In systems with medium-range AA-S Panţir, Osa 1T, Buk M2 and Thor, the guide channel of fire control stations, based on an independent research module in the infrared spectrum (1TPP1) with two sensors operating over two channels. One search is for omnidirectional airspace operating in the range of 3 to 5 microns, and the other to the strict localization of cruise missiles after thermal imprint in the range of 0.8 0.9 microns. The sensor signals are processed digitally and sent to the fire control center. The time elapsed between the detection of the target and the missile out of the ramp is 4 seconds.

The Syrian army has over 4000 portable missiles Russian 9K32, 9K34, and hundreds of the most modern 9K338 Igla-S variant, operators are equipped with night vision. As the cruise missile flying at 50-100 m above the terrain overflown, once detected, the probability of being shot with one portable missile with a maximum range of 5 km, is 48%.

Since 2000, Syria has worked for 10 years with the Italian company Galileo Avionica, which it has imported or produced under license, thousands of military-type infrared cameras, which only 500 were mounted on tanks and fighting machines of infantry.

In addition, the company Rosoboronexport (Russia Romarm) delivered to the Syrian army in June a list of military items, including an unusually large number of individual devices of night vision, based on a request received in March 2013 .

Recall that the time available to the commander of the Syrian AA defense for the reconfiguration of the device AA is fighting an hour, two at the most, after notification by the Russians launch and trajectory of the first wave of missiles cruise. Military art is the happy combination of knowledge of military science, skills exercised in command and above-average intelligence and imagination dose. This is the Syrian commanders AA defense to demonstrate that they have the practical mastery of the art of war. I do not venture to launch assumptions about the optimal configuration of the future defense posture AA Syrian.

Disruptive to the AA Syrian defense dynamic combat factor is interference with decoys, can generate hundreds of false targets in Syrian airspace to trigger premature reaction of the AA defense, allowing penetration necessary cruise missiles. Usually false targets before the cruise missiles 3 to 5 minutes. They depart on a predetermined path and change direction during flight not to reveal the true location of the actual objectives of the cruise missiles. This type of interference has been used successfully in Yugoslavia, wars in the Gulf and Libya by U.S. aircraft EA-6B Prowler and EA-18G Growler EC-130H Compass Call. The Israeli army used to attack targets in Syria, the Gulfstream G550 aircraft interference Shavit.

Jamming aircraft are forced to stay away from the border, beyond the reach of the Syrian AA defense. The radar aircraft interference signal is weaker and more distant than those of false targets it generates, so the automated management of the AA defense takes priority over the most dangerous target, ignoring the camera interference.

The Russian naval group in the Mediterranean constantly monitors the entire spectrum of electromagnetic emissions in the region by boat Priazovie (SSV-201).

With a combined work with electronic equipment batteries AA type S-300 aboard the cruiser Moskva, a few seconds after the start of the show jamming aircraft, crew Priazovie obtained by triangulation method, the location of each interference generator. Once identified, these targets are placed in continuous monitoring data from their trajectory are sent to all Russian ships and space command center in Armavir.

If the Russians have proposed that the Syrians will instantly information from them on the radar screens, and can eliminate all false targets and shoot down aircraft interference.

By Valentin Vasilescu , aviation pilot, former deputy commander of military forces at Otopeni Airport, graduate of Military Science at the Academy of Military Studies in Bucharest in 1992.

By Valentin Vasilescu , aviation pilot, former deputy commander of military forces at Otopeni Airport, graduate of Military Science at the Academy of Military Studies in Bucharest in 1992.