[This is the same scenario which would play-out in the US, if the govt ever moved against Mexican illegals… minus any indiscriminate head-chopping. The royals will be greatly dismayed when they finally figure-out that there are ZERO SAUDIS who are willing to take the menial, demeaning, jobs that are usually done by foreigners and dark-skinned types, which pay next to nothing.  This exercise in bad judgement reveals the intellectual liabilities of the Saudi royal family, almost as much as their string of stupid decisions regarding Libya, Syria and Lebanon (and in a dozen or more other Muslim countries).  King Abdullah and Bandar are truly mental midgets, imbeciles, in charge of millions of Islamic radicals and trillions in petrodollars.  Will the dumb ass royals now try to fill all of those millions of menial jobs at gunpoint?

The burning of Riyadh to the ground will be a sight that will warm my hardened old heart!] 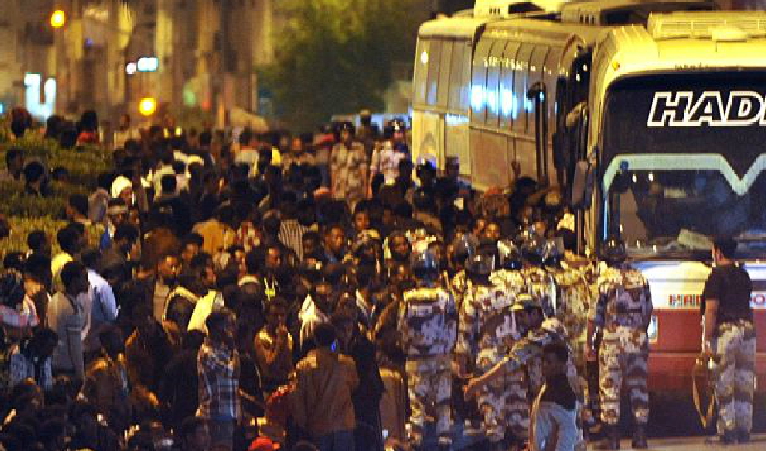 (RIYADH, Saudi Arabia) — Garbage is piling up on streets around the mosque housing the burial site of the Prophet Muhammad. Grocery stores have shut their doors and almost half of Saudi Arabia’s small construction firms have stopped working on projects.

The mess is because foreign workers on which many businesses rely are fleeing, have gone into hiding or are under arrest amid a crackdown launched Nov. 4 targeting the kingdom’s 9 million migrant laborers. Decades of lax immigration enforcement allowed migrants to take low-wage manual, clerical and service jobs that the kingdom’s own citizens shunned for better paying, more comfortable work.

Now, authorities say booting out migrant workers will open more jobs for citizens, at a time when unemployment among Saudis is running at 12.1 percent as of the end of last year, according to the International Monetary Fund. But the nationalist fervor driving the crackdown risks making migrant workers vulnerable to vigilante attacks by Saudis fed up with the seemingly endless stream of foreigners in their country.

Since the Saudi government began issuing warnings earlier this year, hundreds of thousands of foreign workers have been deported, though some were able to avoid arrest by getting proper visas in an amnesty program. That amnesty ended last week, and some 33,000 people have since been placed behind bars. Others have gone into hiding.

About 40 percent of small construction firms in the kingdom also have stopped work because their foreign workers couldn’t get proper visas in time, Khalaf al-Otaibi, president of the World Federation of Trade, Industry and Economics in the Middle East, told Arab News.

Saudis say dozens of businesses like bakeries, supermarkets, gas stations and cafes are now closed. They say prices have also soared for services from mechanics, plumbers and electricians.

Adam Coogle, a Middle East researcher for Human Rights Watch, told The Associated Press that if the kingdom wants to be serious about the problem, authorities should look at the labor laws and not at the workers. Saudi Arabia’s sponsorship system, under which foreign laborers work in the kingdom, gives employers say over whether or not a foreigner can leave the country or change jobs, forcing many into illegal employment.

“The entire system by which Saudi Arabia regulates foreign labor is failing,” he said.

The owner of a multi-million dollar construction company in the Saudi capital, Riyadh, said he had to halt all of his projects. He told the AP he was not the legal sponsor of most of his laborers but that they made more money working as freelance hires.

“These people have worked in this country and their blood is in the stones and buildings,” he said, speaking anonymously for fear of government reprisal. “You cannot just, like that, force them out.”

Despite feeling the loss of the everyday work the foreign laborers provided, Saudis largely have cheered on the police. Residents have taken matters into their own hands on several occasions, despite police calling on the public not to make citizen arrests.

Over the weekend, Saudi residents of Riyadh’s poor Manhoufa neighborhood fought with Ethiopians, detaining some, until police arrived more than two hours later. Video emerged of a crowd of Saudis knocking on the door of an Ethiopian man’s house, then dragging him out and beating him in the street. A Saudi and a migrant were killed and dozens wounded in the clashes.

The violence began when east Africans protesting the crackdown barricaded themselves in the narrow streets of Manhoufa, throwing stones, threatening people with knives and damaging cars. Days earlier, an Ethiopian man was killed by police chasing down migrants.

Violence broke out again days later in the same neighborhood, and a Sudanese man was killed in clashes Wednesday. In the Red Sea coastal city of Jiddah in the poor al-Azaziya neighborhood, clashes also broke out when police combed the area for migrants.

“This is not racism or a lack of respect for diversity, but you cannot imagine how much negative comes from these groups instead of positive. These people, every day, cause problems,” said Jiddah resident Abdulaziz al-Qahtani, who posted online video from the Riyadh clashes that he said a friend took.

Since the weekend clashes, Saudi officials say 23,000 Ethiopians, including women and children, have turned themselves in to the police. Authorities are now holding them in temporary housing ahead of deportation, saying many have no documentation at all, having made their way into the kingdom with the help of smugglers by way of Yemen.

Ethiopia’s Foreign Ministry said in a statement that officials in Addis Ababa sought an explanation from Saudi Arabia’s envoy over the “mistreatment” of Ethiopians in the kingdom.

Workers from neighboring Yemen also face harassment. Yemeni Nobel Peace Prize Laureate Tawakkol Karman posted a picture last week on her Facebook page of what appeared to be a Saudi man in his car grabbing hold of a Yemeni man for a police officer.

Saudi columnist Abdul-Rahman al-Rashed cautioned Saudis to remember that without “a strong state and oil revenues” they too may have emigrated in search of work.

“Those deprived of the chance of a proper life can understand the feeling of those wanting to seek a better life,” he wrote in the Asharq al-Awsat newspaper.