[The pattern displayed so far is too consistent to be the result of chance, or a blundering foreign policy….
All of the wars started within the greater war (which used to be called “war on terror”) have blocked oil and gas which was about to be brought onto the market.  There must be hard evidence floating around somewhere on the Internet which proves that the US, the Saudis and all Western governments have been following a foreign policy of exporting wars wherever they cannot control the harvesting of oil and gas.

Whether my opinion on this matter is right or wrong, it has become obvious that oil and gas prices would bottom-out if all of these untapped resources were allowed to be brought online now, through international cooperation.  This renewed civil war in Libya provides us with a perfect demonstration of what we have been doing to Africa and to the sovereign nations of the Middle East.  By destroying the govts. of Afghanistan, Iraq, Yemen, Libya, Syria and the rest, we have made it impossible to bring their oil and gas plans to fruition.

We are fighting in Syria to keep its gas “bonanza” under the ground.  Until the Syrian landmass and outlet to the Mediterranean is secured by Imperial terrorist puppets, there will be no gas pipelines built through the Middle East, or through any Muslim country under our influence.  The beneficiaries of this treacherous policy have been the Saudis, the United States and the Big Oil giants.

Afghanistan violence prevents the building of the TAPI pipeline from Turkmenistan to the Arabian Gulf.

The two major wars against Iraq, and the punitive sanctions in between them, have prevented the pumping and piping of Iraqi oil and gas (more oil than in Saudi, with gas reserves only estimated), helping to maintain inflated fuel prices since the first Gulf War.  From 1988 on, there has been fighting in southern Iraq.  The Iraq War was reportedly started by Halliburton’s tapping of Iraqi oil from Kuwait, using “slant-drilling,” allegedly using “unbalanced drills” (also known as “horizontal drilling” (used in “fracking”)

The renewed Libyan civil war has taken the world’s finest crude oil off the market, although the tap can be opened periodically, whenever oil stocks need a little nudge upwards.  This latest ploy to take Libya’s sweet oil off the market has been led by a man who has lived in Virginia for the past 20 years, General Khalifa Hifter.

The Pentagon plans to defend the resources of the world (as if they were all our own) by bottling those resources up, to be tapped in the future, whenever doing so would become profitable.  No one has the power to challenge this Imperial arrangement.] 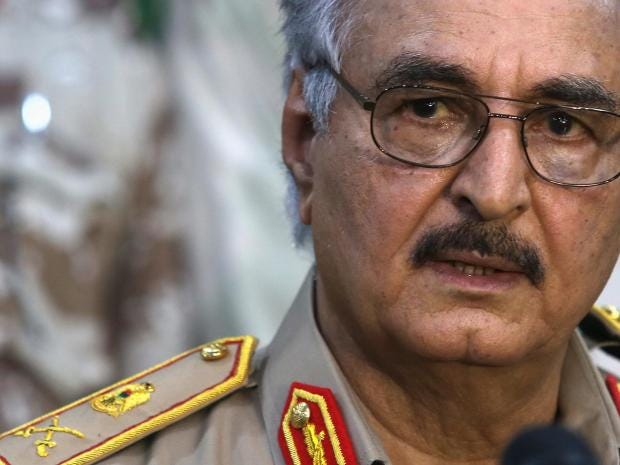 Libya in crisis: Rival militias position themselves for civil war as country disintegrates

Libya is tipping toward all-out civil war as rival militias take sides for and against an attempted coup led by a renegade general that has pushed the central government towards disintegration.

In a move likely to deepen the crisis, the army chief of staff, whose regular forces are weak and ill-armed, called on Islamist-led militias to help preserve the government.

His call came after forces commanded by General Khalifa Hifter stormed the parliament building in Tripoli at the weekend, after earlier attacking Islamist militia camps in Benghazi.

The fighting has been the heaviest since the overthrow of Muammar Gaddafi in 2011 and there are signs that opposing militias and elements of the security forces in different parts of the country and with differing ideologies may be readying to fight a civil war.

A Libyan air force base in Tobruk in the east of the country on Monday declared allegiance to Gen Hifter while Benghazi airport has been closed after being hit with rockets. Some 43 people were killed and 100 wounded in fighting in Benghazi at the end of last week.

The attack on the parliament building in the capital on Sunday was made by militiamen armed with truck-mounted anti-aircraft guns, mortars and rocket-propelled grenade launchers. The parliament leader Nouri Abu Sahmein – in sympathy with the Islamists – called on an alliance of Islamist militias known as the Libyan Central shield to stop Gen Hifter’s forces.

Al-Qa’ida type movements such as the Lions of Monotheism have pledged to resist Gen Hifter, a spokesman saying on its website that “you have entered a battle you will lose”.

The most powerful competing paramilitary movements are based in Misurata on the coast east of Tripoli and Zintan in the mountains to the west. Zintan appears to be backing Gen Hifter, whose own support inside and outside the country is shadowy, with the powerful Qaqaa and Sawaiq brigades.

The latest step in the dissolution of the Libyan state underlines the degree to which the opposition has proved unable to fill the vacuum left by the fall of Gaddafi. The war which led to his defeat in 2011 was largely fought by NATO air power.

Paradoxically, both the militiamen attacking and defending the government are paid out of the central budget. In addition, Gaddafi had 100,000 men under arms who still receive a monthly salary as if they were part of the regular forces, but few turn up to work.

Al-Qa’ida type militias such as Ansar al-Sharia are strongest in Benghazi where they are held responsible for much of the mayhem. In Tripoli, Islamist militia leaders and their staffs have taken over whole floors of the best hotels such as the Radisson Blu.

On news of fresh fighting in Libya, the international price of oil rose to $110 a barrel for Brent crude. The Libyan oilfields had just been reopened after a prolonged closure of oil export terminals in the east of the country but are now shut again. Libyan oil output has fallen to 200,000 barrels a day, compared to 1.4 million barrels a day produced last year.

Many people in Tripoli express sympathy with General Hifter’s denunciations of the Islamic militias as the popular mood becomes increasingly desperate over the collapse of civil order and the central state. Gen Hifter said “this is not a coup against the state, we are not seeking power. Terrorism and its servants want it to be a battle”. The general, who in the 1980s fought for Gaddafi in Mali but defected to the US, where he lived for many years, returned to Libya in 2011 but played only a limited role in the revolt. His hostility to the militias will go down well with many Libyans, but his forces are in practice just one more militia faction and dependent on his alliance with other militias.

Nevertheless, Libyans express growing support for anybody who can restore order and public safety by whatever means necessary.