Mehdi Nemmouche was carrying a rifle, handgun and a video camera when he was arrested stepping off a bus in Marseille

A French former jihadist volunteer in Syria has been arrested over last week’s deadly shooting at the Jewish Museum in Brussels.

Police found a Kalashnikov rifle and a handgun similar to the ones used in the attack in the bag of Mehdi Nemmouche, a 29-year-old French citizen, when he stepped off a bus in Marseille on Friday after an overnight trip from Brussels.

Investigators also found a memory stick containing a video in which a person claims to have carried out the attack, displays weapons similar to those used and unfurls a sheet of cloth with the words Islamic State of Iraq and Syria written on it, the Paris prosecutor said.

The voice – the man is not seen – also says he tried to film the attack with his GoPro but that it did not work, he said.

If the suspect is proved to be the killer, this would be the first known case of a European volunteer with Islamic radicals in Syria to have carried out an attack upon his return to Europe.

The May 24 shooting by a lone gunman killed three people outright – an Israeli couple and a Frenchwoman, while the fourth victim, a 24-year-old Belgian man who worked at the Jewish Museum, remains in critical condition in hospital.

Chilling security camera footage released by Belgian authorities showed the gunman, wearing a dark cap and sunglasses, walking into the building, taking an automatic rifle from a bag and shooting through a door before calmly walking away.

“During his last stay in jail he was noticed for extremist [Islamic] proselytism,” he said.

He was released in December 2012 and three weeks later went to Syria for a year, returning to Europe via Malaysia, Singapore and Bangkok, he said.

Mr Nemmouche was detained on suspicion of murder and attempted murder in connection with a terrorist enterprise and was transferred to the headquarters of the French domestic intelligence agency DGSI in the Paris suburbs.

He has refused to answer any of his interrogators’ questions, Mr Molins said.

French President Francois Hollande said France was determined to do all it could to stop radicalised youths from carrying out attacks.

This is a growing worry in a country that is home to Europe’s largest Muslim and Jewish communities.

Nearly 800 French nationals have travelled to Syria to fight alongside jihadists in the war-torn Arab state.

European Jewish Congress President Moshe Kantor praised French and Belgian authorities for the arrest of Mr Nemmouche, saying there was a need to clamp down on the spread of hate crimes, especially by those hardened by bloodshed in places like Syria.

“For too long authorities in Europe have acted speedily after the fact. It is now time for all to turn attention and set as the highest priority the prevention of these vicious crimes,” he said.

French security sources said that Mr Nemmouche’s behaviour was not that of a jihadist trained by a radical group such as Al-Qaeda. They pointed out that he put himself at great risk of capture by the authorities by carrying guns on a bus travelling a route watched by customs officers seeking to arrest drugs couriers.

The bus he took began its journey in Amsterdam with a stop-off in Brussels.

Belgian police carried out raids in case in the Courtrai region on Sunday morning, where the suspect is believed to have spent time, and are questioning two people there.

Three men have been arrested in northern India for brutally attacking the mother of a rape victim after she refused to withdraw her police complaint.

Superintendent Dinesh Kumar said on Friday that the men, including the father of the man accused in the May 11 rape, followed the mother into a field and beat her severely.

She was in critical condition in a hospital in Etawah, a small town in Uttar Pradesh state, the AP news agency reported.

News of the attack comes amid outrage in Uttar Pradesh over the death earlier this week of two teenage girls who were found hanging from a tree after being gang-raped.

Police have arrested three people over the attack on the sisters, aged 14 and 15.

Rape victims cannot be named under Indian law, even if they are dead.

[Another fake, hypocritical “humanitarian” effort, intended to cripple American business and to bolster the international financiers who own Obama.  This time,   Look for some disgruntled, unemployed coal-miners to squeeze-off a few rounds (or worse) at the White House.]

“The cost of carbon pollution ‘can be measured in lost lives’ and roughly ‘100,000 asthma attacks and 2,100 heart attacks will be avoided’ in just the first year that the standards go into effect, Obama said in the address, recorded Friday at the Children’s National Medical Center, in Washington, D.C., where he visited young asthma patients.” 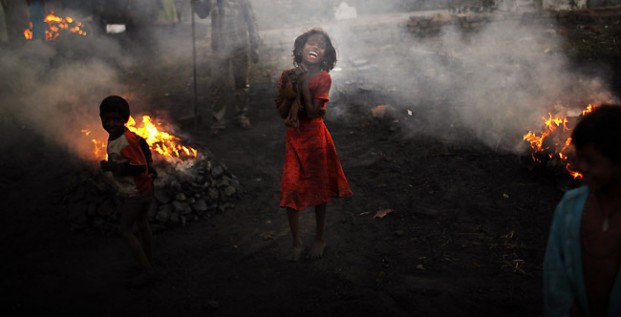 All for the poor little kids with asthma…yeah, right, Obama.

President Obama on Saturday tried to bolster public support for new rules his administration will announce next week on coal-firing power plants, arguing their carbon emissions are a national health crisis – beyond hurting the economy and causing global warming.

The cost of carbon pollution “can be measured in lost lives” and roughly “100,000 asthma attacks and 2,100 heart attacks will be avoided” in just the first year that the standards go into effect, Obama said in the address, recorded Friday at the Children’s National Medical Center, in Washington, D.C., where he visited young asthma patients.

The new, unprecedented rules, which sidestep Congress, are set to be announced Monday and reportedly attempt to cut emissions by as much as 25 percent over 15 years.

Obama’s attempt to reduce greenhouse gases, which he and supporters blame for global warming, also are being met with strong opposition from the energy industry, big business and congressional Democrats and Republicans, who argue Obama’s green-energy agenda is tantamount to a “War on Coal.”

The U.S. Chamber of Commerce argues the rule will kill jobs, increase electricity prices and close power plants across the country.

The group is releasing a study that finds the rule change would result in the loss of 224,000 jobs every year through 2030 and impose $50 billion in annual costs.

Many of the Democrats who are raising concerns represent coal-producing states and face tough 2014 reelections bids.

Among them is West Virginia Democratic Rep. Nick Rahall, whose state gets 96 percent of its power from coal. Rahall said Thursday that he didn’t have specific details about the rule but “from everything we know we can be sure of this: It will be bad for jobs.”

The rule will be executed at the state level, setting goals for states on reducing carbon emissions but also giving them flexibility on how to meet the new standards.

Still, putting the new rule into effect is expected to be a long, complicated process that could extend past the 2016 presidential elections and the end of Obama’s second term in January 2017.

The process includes a one-year-long public comment period. And the president is using a 30-year-old law that was not intended to regulate the gases blamed for global warming.

He was forced to rely on the Clean Air Act after he tried and failed to get Congress to pass a new law during his first term. When the Republicans took over the House, the goal became impossible.

While coal-firing plants produce about 40 percent of the electricity in the county, they also create about one-third of the carbon pollution, which makes them the country’s second-largest emitter of greenhouse gases.

“There are no national limits to the amount of carbon pollution that existing plants can pump into the air we breathe. None,” Obama said Saturday in the weekly radio and Internet address.

“We limit the amount of toxic chemicals like mercury, sulfur, and arsenic that power plants put in our air and water. But they can dump unlimited amounts of carbon pollution into the air. It’s not smart, it’s not safe, and it doesn’t make sense.”

His rule will prescribe technological fixes or equipment to be placed on existing plants and require new ones to capture some of their carbon dioxide and bury it underground. States will be allowed to require power plants to make changes such as switching from coal to natural gas or enact other programs to reduce demand for electricity and produce more energy from renewable sources.

They also can set up pollution-trading markets as 10 other states already have done to offer more flexibility in how plants cut emissions.

The Associated Press contributed to this report.