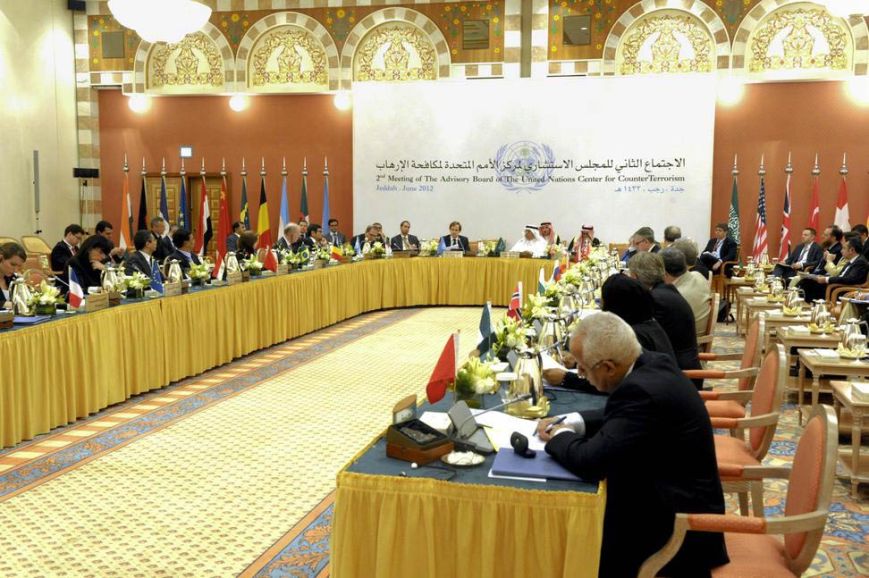 A wide view of the 2nd Meeting of the Advisory Board of the UN Centre for Counter-Terrorism (UNCCT), attended by Secretary-General Ban Ki-moon, in Jeddah, Saudi Arabia. UN Photo/Evan Schneider

[The Obama Administration is disgracing the American people by choosing to honor the Saudi efforts to white-wash their bloody deeds, sending John Kerry to Jeddah on September 11, to pursue anti-ISIL operations.  Instead of supporting Riyadh’s attempt to buy public opinion with a fancy building (“white elephant”) for the United Nations, Obama should be in the forefront of the U.N. Counter Terrorism Center in Jeddah opposition.

Saudi royals are clearly trying to dominate the debate on anti-ISIS operations by gifting this building to the UN.  By setting this upcoming event on 9/11, the Saudis are once again flaunting their diplomatic immunity and sticking it in our faces.

“The Kingdom of Saudi Arabia recognizes that the establishment of U.N. Counter Terrorism Center is considered as the culmination of the objectives of the International Conference on Combating Terrorism.”

In other words, this is the real motive behind the sudden burst of intensive Saudi image-polishing. They intend to capitalize on the anti-ISIS phenomenon and to clean-up the image created by Wahhabi terrorism, close the books by changing the topic.

We are supposed to forget the historical record on Saudi Arabia as the source of all Sunni terrorist leaders and to instead, embrace Saudi Arabia as the champion of counter-terrorism.  There are Saudi “mujahedeen” ‘to be found at the center of every major Sunni terrorist outfit in Asia and North Africa, yet, we are to overlook these uncomfortable facts in favor of a new narrative because of a lousy $10 million building.

The announced mission of this conference is to work on the global counterterrorism strategy.  The most important topic at hand is supposed to be debate on bombing ISIS, whether to endorse strategic bombing in Syria, without government permission.

Lebanon’s Minister of Administrative Development Affairs Nabil de Freij hints that the real reason for the conference and for Iran’s notable absence is to push the Saudi Big Lie that Bashar Assad and Iran are the real sponsors of ISIS, perhaps justifying a radical approach to unapproved bombing in Syria–

“indicates de Freij that if we go back to the reasons for the existence of the Islamic state and the victory in Iraq and Syria, we find that the beneficiary of the existence of these organizations is the Damascus regime, and its allies in Lebanon,”..: “Above all, you must understand Iran that meddling in Syria is one of the forces Daash and others, must be issued orders in order to withdraw Hezbollah from Syria.”]

Anti-ISIS conference to be held in Jeddah, Saudi Arabia

Jeddah (IraqiNews.com) On Wednesday and Thursday, the American Secretary of State John Kerry will attend meetings in Jeddah, Saudi Arabia with several Arab foreign ministers to discuss ways to confront the organization of the Islamic State in Iraq and the Levant, in addition to building an international coalition against it, according to what Arab officials said to France Press Agency.

An Egyptian official said that ”his country welcomes the American and the international move to combat terrorism and the organization ISIS,” stressing that Egypt will provide “all the political support for this move. In regard to its participation in a security operation, it should be within the framework of the United Nations and the decision of the UN Security Council.”

In Beirut, a government source confirmed that the Lebanese Foreign Minister Gebran Bassil will participate in this meeting as well.

Saudi Press Agency  said that “on Thursday Saudi Arabia will host a regional meeting in Jeddah that will include the Gulf Cooperation Council for the Arab Gulf States, Egypt, Jordan and Turkey, with the participation of the United States. The meeting will discuss the issue of terrorism in the region, and the extremist organizations that stand behind it, in addition to ways to combat it.  But