Terry Lee Loewen…a clearcut example of FBI entrapment and leading the individual into terrorist activity.  Loewen may have been self-radicalized, but it took FBI agents to radicalize the suspect to a new level of militant committment which didn’t exist prior to their radicalization efforts.  Terry was just another insignificant, disillusioned, middle-age, middle-class, American worker, with a broken marriage, who paid close attention to national news on the terror war.

This was what originally motivated (“radicalized”) him into hating the American terror war, filling him with shame for the great pain we were inflicting upon the Muslim world.   Terry was known by his wife and son as a mild-mannered, quiet family guy.  His family does not know this other guy, the one who experienced a moment of epiphany, finally understanding the war and its ultimate cost inflicted upon the Muslim world.

Until baited by FBI seducers into taking part in an imaginary crime, Terry Loewen would have been no different than a lot of us.  Like most of the “bomb plots” busted here in the US since the start of the war, the FBI, once again, was the instigator of this terrorist plot to build a bomb facsimile and to draw clueless suckers to it.   There was no crime before the FBI created one, except for being another malcontent.  The man admitted himself, that he would not have been likely to follow his violent fantasies to fruition without “FBI agent 1” and “FBI agent 2” to supply a bomb for him.

Terry Lee Loewen first became “radicalized” on YouTube, where he came to closely follow the rantings of a group of three disillusioned Americans, who called themselves Revolution Muslim (even though the leader is Jewish).  All three of these flakes supposedly converted to Islam and adopted Muslim names after listening to the rhetoric of a Jamaican “Imam,” Abdullah el-Faisal.

Loewen learned about Islam from a Jamaican Internet preacher and three East Coast deadbeats who were fronting a probable Mossad operation (the Jewish dude spent years in an Israeli rabbinical seminary).   He never met any real AQAP terrorists.

WICHITA, Kan. (AP) — Federal prosecutors say a man accused of plotting a suicide bomb attack at a Wichita, Kansas, airport was “well on his way” to becoming a violent terrorist before authorities began investigating him.

A heavily redacted government filing Monday seeks to counter defense arguments that an undercover FBI agent radicalized Terry Loewen. The defense contends the government conduct in the operation was entrapment and that terrorism-related charges against Loewen should be dismissed.

But prosecutors argued it would have been outrageous for the FBI to leave Terry Loewen to his own devices, trolling the internet for someone to help him.

Loewen was arrested in December 2013 when the former avionics technician tried to bring a van filled with inert explosives onto the tarmac at Mid-Continent Airport.

Loewen has pleaded not guilty. 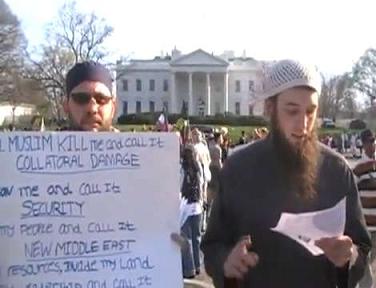 A New Jersey man who co-founded a radical Islamic website has pleaded guilty to using the Internet to make threats against Jewish groups.

Al-Khattab, who converted from Judaism and was previously known as Joseph Cohen, is the third person connected with Revolution Muslim to be convicted in federal court in Alexandria. Morton and another man, Zachary Chesser, admitted using the site to deliver thinly veiled threats against the creators of the “South Park” television show for perceived insults to the prophet Muhammad.

[EDVA] Zachary Adam Chesser (a/k/a Abu Talhah Al-Amrikee) was arrested on charges that he provided material support to Al-Shabaab, a designated foreign terrorist organization. Chesser admitted to federal agents that he attempted on two occasions to travel to Somalia to join Al-Shabaab as a foreign fighter. According to the affidavit, Chesser maintained several online profiles dedicated to extremist jihad propaganda. These profiles were allegedly used by Chesser to post pro-jihad messages and videos online. In October 2010, Chesser pleaded guilty to a three-count criminal indictment that included charges of communicating threats against the writers of the “South Park” television show, soliciting violent jihadists to desensitize law enforcement, and attempting to provide material support to Al-Shabaab. He was sentenced to 25 years in prison in February 2011.

In May 2011, Jesse Curtis Morton, (aka Younus Abdullah Mohammad) is charged with communicating threats in the “South Park” episode. Morton helped run a website, RevolutionMuslim, with Zachary Chesser. In a jointly drafted statement for the group Revolution Muslim, convicted terrorist Zachary Chesser and Morton, threatened “South Park” producers with murder over illustrated depictions of the Prophet Muhammad. Morton pleaded guilty to his role in threatening the producers of “South Park” for their depiction of the Prophet Muhammad and related charges. He was sentenced to 138 months for using the Internet to solicit murder and encourage violent extremism. In October 2013, Yousef Mohamid al-Khattab (a.k.a. Joseph Cohen) of Atlantic City, NJ, pleaded guilty to using the Internet to support violent jihad and threaten Jewish organizations. Al-Khattab helped Morton found the Revolution Muslim website in 2007.