“My dog Millie knows more about foreign affairs than these two bozos.”

[The Marshall Islands-flagged, US Container Vessel Maersk Tigris, was diverted to a point near Bandar Abbas, where it is now anchored at sea with several other Iranian vessels.

The ship was running in Iranian waters, according to this reference, INTER. MARITIME BOUNDARIES, Vol. II, before it was turned north.

According to the following article from the US Navy, the incident was over an unpaid Iranian portage billing, but it is a newly-commissioned vessel, which, according to its track history, has never docked at an Iranian port.

Posted before the article are a series of snapshots, documenting Maersk Tigris positions.  Track history reveals that the voyage began at the port of Buyukcekmece, in Istanbul, before running the Red Sea, to the Gulf.  Maersk is alleged to be American-owned, but listings link it to Hamburg, Germany.]

This is a current snapshot of Hormuz St. traffic.  Notice vessels turning back eastward, after reaching a point north of Oman.  Nothing is approaching from the south, to this point…something is going on…]

Iranian navy vessels shot at a Marshall Island-flagged cargo ship in the Strait of Hormuz and directed it further into Iranian territorial waters, the Pentagon confirmed. U.S. Naval Forces Central Command (NAVCENT) has sent aircraft to observe and directed USS Farragut (DDG-99) to monitor the situation.

After the 52,600 gross ton cargo ship was surrounded by Islamic Revolutionary Guard Corps Navy (IRGCN) patrol craft, “the master was contacted and directed to proceed further into Iranian territorial waters,” according to a statement from Pentagon spokesman U.S. Army Col. Steve Warren.
“He declined and one of the IRGCN craft fired shots across the bridge of the Maersk Tigris. The master complied with the Iranian demand and proceeded into Iranian waters in the vicinity of Larak Island.”

The state-owned Iranian outlet Fars News Agency reported it “confiscated the American trade vessel” at the request of Iran’s Ports and Maritime Organization.

“The ship was seized after a relevant court order was issued for its confiscation,” a source is quoted as saying. The story adds that the IPMO had monetary differences with the ship owner, and the IRGCN would escort the ship to Bandar Abbas.

According to Vessel Finder, the container ship made its last port stop in Jeddah, Saudi Arabia, after several stops earlier in the month throughout Turkey, and was headed to Jebel Ali, United Arab Emirates. The ship was expected to reach its destination at 21:30 UTC/Zulu time. Instead, the ship was last reported at 14:20 Zulu off the coast of Bandar Abbas, Iran, near the narrowest part of the Strait of Hormuz. Warren said the IRGCN vessels surrounded the cargo ship at 0905 Zulu.

[The following posts perfectly frame the European opinion on refugees/illegal migrants.  Where a representative of tiny Malta (which is situated directly midstream between the African exodus and the safety of Europe) gives perfect expression to Human Hope, the mouthy spokesperson for British self-appointed overlords of the Continent (and Civilization itself) spews rivers of racist hatred over the torrent of “useless eaters” who were originally invited to Europe to serve as a new peon/peasant class.  BTW, ]

“No, I don’t care. Show me pictures of coffins, show me bodies floating in water, play violins and show me skinny people looking sad.”

A sea of red

A sea of words has flowed lately. We all cried when we heard the harrowing stories of people dying in the sea surrounding our tiny country.

I say we all cried but some are still pig-headed and spout horrid words even about the dead, the sad dead in our Mediterranean.

This sea has seen many wars, battles, victories, celebrations and it has been a lifeline for countries, empires, peoples. It has seen tragedy, it has seen happiness, it is the salt of our earth, the succour and hope of many. Only God, Allah, Neptune, Vishnu or whoever rules the skies and the seas, knows what lies in its basin.

It is now the resting-place of too many people, too many people who left their homeland in boats in dreams of better days. May their death help us all find a solution or, if a solution is impossible, at least more and enduringly more compassion for all and not just those of our own creed, colour or condition.

Today they represent a people who are the suffering, the downtrodden, the desperate. So desperate that they trust brigands and criminals who take them on board boats not even fit for cattle. Today it is they—tomorrow it could be us on that boat escaping God knows what mishap, what condition, what desperation.

Our blue sea will remain blue but let us remember that it is now tinged with red and feel compassion. We are all human, the ones who died and the ones who still breathe in freedom.

Victor Calleja has been in the world of communications for over 30 years. He now writes for a living. Follow him also on victorcalleja.com.

“No, I don’t care. Show me pictures of coffins, show me bodies floating in water, play violins and show me skinny people looking sad.”

Because in the next minute you’ll show me pictures of aggressive young men at Calais, spreading like norovirus on a cruise ship.

Watching them try to clamber on to British lorries and steal their way into the UK, do I feel pity? Only for the British drivers, who get hit with a fine every time one of this plague of feral humans ends up in their truck.

Understand this, these two populations are the same. The migrants harassing Brit truckers at the port are the same as the vagrants making the perilous trip across the Med.

During a recent operation by the Italian coastguard to rescue migrants off the coast of Libya, the people traffickers threatened crew with Kalashnikovs to get their vessel back.

Clearly, boats are in short supply. And that is a good thing. No boats, no migrants.

There is a simple solution to this. It’s time for the Italians to stop singing opera, drinking espresso and looking chic in chuffing everything.

It’s time to get Australian.

Australians are like British people but with balls of steel, can-do brains, tiny hearts and whacking great gunships.

Their approach to migrant boats is the sort of approach we need in the Med.

They threaten them with violence until they bugger off, throwing cans of Castlemaine in an Aussie version of sharia stoning.

And their approach is working. Migrant boats have halved in number since Australian Prime Minister Tony Abbott got tough.

We don’t need another rescue project. The now defunct £7million-a-month Mare Nostrum — Italy’s navy search and rescue operation — was paid for (in part) by British taxpayers.

And we don’t need a campaign from Save the Children to encourage more migrants to take the journey.

What we need are gunships sending these boats back to their own country.

You want to make a better life for yourself? Then you had better get creative in Northern Africa.

Britain is not El Dorado. We are not Elysium. Some of our towns are festering sores, plagued by swarms of migrants and asylum seekers, shelling out benefits like Monopoly money.

Make no mistake, these migrants are like cockroaches. They might look a bit ‘Bob Geldof’s Ethiopia circa 1984′, but they are built to survive a nuclear bomb. They are survivors.

Once gunships have driven them back to their shores, boats need to be confiscated and burned on a huge bonfire.

Drilling a few holes in the bottom of anything suspiciously resembling a boat would be a good idea, too, just for belt and braces.

Unless we take the emotion out of this and start connecting the migrants in the Med with the Africans clinging to trucks in Calais, we cannot deliver an appropriate response.

If you think rescue boats are a good idea, you may as well set up a Libya to Italy P&O ferry service and send your taxes to Africa by direct debit for good measure.

Or if you think like me, then it’s time to get Australian. Bring on the gunships, force migrants back to their shores and burn the boats.

As it turns out, I do care. I care passionately about British truckers and taxpayers in the UK.

[I just posted it for the great title.]

George W. Bush is back, and he’s concerned that the foreign policy catastrophes he helped create aren’t being fixed 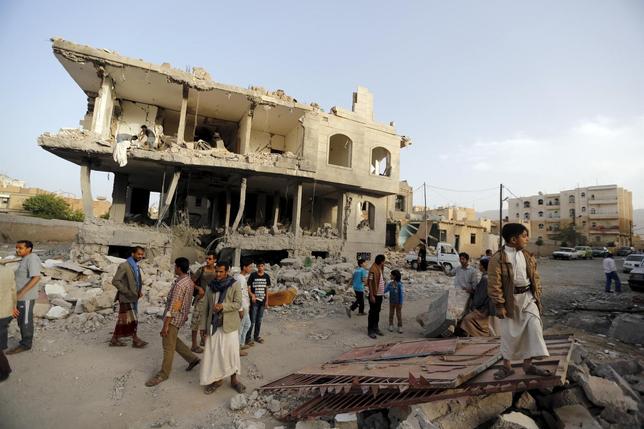 People stand at the site of an air strike in Sanaa April 26, 2015.
Reuters/Khaled Abdullah

(Reuters) – The United States squarely blamed Houthi fighters on Monday for renewed Saudi-led bombings, accusing them of using a relative lull in airstrikes meant to help set the stage for peace talks to instead pursue battlefield advances.

Saudi-led aircraft pounded Iran-allied Houthi militiamen and rebel army units on Monday, dashing hopes for a pause in fighting to let aid in as relief officials warned of a catastrophic humanitarian crisis.

U.S. Secretary of State John Kerry said he would discuss the conflict with Iran’s foreign minister later on Monday, adding: “I will certainly urge that everybody do their part to try to reduce the violence and allow the negotiations to begin.”

Kerry and other U.S. officials said Houthis had sought more gains since Riyadh’s announcement last week that it was ending its nearly five-week-old bombing campaign, except in places where the Houthis were advancing.

“The Saudi shift … was predicated on the notion that people would freeze in place,” Kerry told a news conference in New York.

“But what happened was the Houthi began to take advantage of the absence of air campaign, moving not only additionally on Aden, but moving in other parts of the country.”

Kerry and other U.S. officials said the Houthis were shifting artillery and forces and targeting certain elements of the Yemen army.

A coalition of Arab countries led by Saudi Arabia, rattled by what they saw as expanding Iranian influence in the Arabian Peninsula, is trying to stop Houthi fighters and loyalists of former President Ali Abdullah Salah taking control of Yemen.

But the air campaign has had little success and vital aid has been reported held up by both sides.

Huxley vs. Orwell: The Webcomic