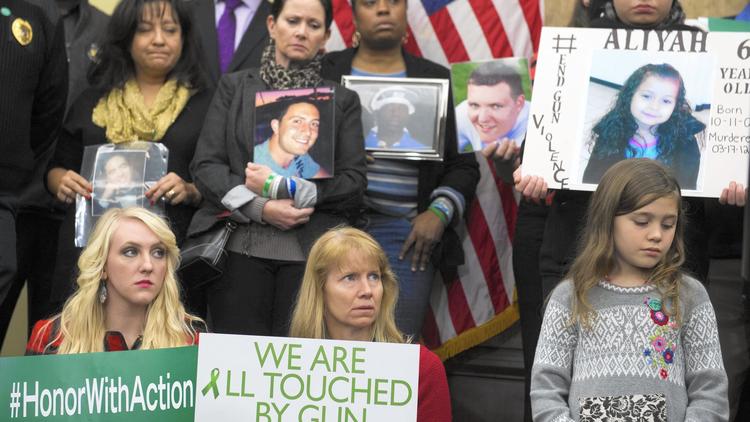 Seeking tighter controls over firearm purchases, the Obama administration is pushing to ban Social Security beneficiaries from owning guns if they lack the mental capacity to manage their own affairs, a move that could affect millions whose monthly disability payments are handled by others.

The push is intended to bring the Social Security Administration in line with laws regulating who gets reported to the National Instant Criminal Background Check System, or NICS, which is used to prevent gun sales to felons, drug addicts, immigrants in the country illegally and others.

A potentially large group within Social Security are people who, in the language of federal gun laws, are unable to manage their own affairs due to “marked subnormal intelligence, or mental illness, incompetency, condition, or disease.”There is no simple way to identify that group, but a strategy used by the Department of Veterans Affairs since the creation of the background check system is reporting anyone who has been declared incompetent to manage pension or disability payments and assigned a fiduciary.

If Social Security, which has never participated in the background check system, uses the same standard as the VA, millions of its beneficiaries would be affected. About 4.2 million adults receive monthly benefits that are managed by “representative payees.”

The move is part of a concerted effort by the Obama administration after the 2012 Sandy Hook Elementary School shooting in Newtown, Conn., to strengthen gun control, including by plugging holes in the background check system.

But critics — including gun rights activists, mental health experts and advocates for the disabled — say that expanding the list of prohibited gun owners based on financial competence is wrongheaded.

Though such a ban would keep at least some people who pose a danger to themselves or others from owning guns, the strategy undoubtedly would also include numerous people who may just have a bad memory or difficulty balancing a checkbook, the critics argue.

“Someone can be incapable of managing their funds but not be dangerous, violent or unsafe,” said Dr. Marc Rosen, a Yale psychiatrist who has studied how veterans with mental health problems manage their money. “They are very different determinations.”

After his Humvee hit a roadside bomb in Iraq in 2007, he was diagnosed with post-traumatic stress disorder and a brain injury that weakened his memory and cognitive ability.

The VA eventually deemed him 100% disabled and after reviewing his case in 2012 declared him incompetent, making his wife his fiduciary.

Upon being notified that he was being reported to the background check system, he gave his guns to his mother and began working with a lawyer to get them back.

Overman grew up hunting in Wisconsin. After his return from Iraq, he found solace in target shooting. “It’s relaxing to me,” he said. “It’s a break from day-to-day life. It calms me down.”

Though his wife had managed their financial affairs since his deployment, Overman said he has never felt like he was a danger to himself or others.

“I didn’t know the VA could take away your guns,” he said.

The background check system was created in 1993 by the Brady Handgun Violence Prevention Act, named after White House Press Secretary James Brady, who was partially paralyzed after being shot in the 1981 assassination attempt on President Reagan.

The law requires gun stores to run the names of prospective buyers through the computerized system before every sale.

The system’s databases contain more than 13 million records, which include the names of felons, immigrants in the U.S. illegally, fugitives, dishonorably discharged service members, drug addicts and domestic abusers.

State agencies, local police and federal agencies are required to enter names into the databases, but the system has been hampered by loopholes and inconsistent reporting since its launch.

The shortcomings became clear in the wake of the 2007 Virginia Tech shooting, in which Seung-Hui Cho killed 32 people. Cho had been declared mentally ill by a court and ordered to undergo outpatient treatment, but at the time the law did not require that he be added to the databases.

Someone can be incapable of managing their funds but not be dangerous, violent or unsafe. They are very different determinations. – Dr. Marc Rosen, Yale psychiatrist

Congress expanded the reporting requirements, but Social Security determined it was not required to submit records, according to LaVenia LaVelle, an agency spokeswoman.

After 20-year-old Adam Lanza killed his mother, 20 children and six school staffers in Newtown in 2012, President Obama vowed to make gun control a central issue of his second term.

But among 23 executive orders on the issue was one to the Department of Justice to ensure that federal agencies were complying with the existing law on reporting to the background check system.

One baseline for other agencies is the VA, which has been entering names into the system since the beginning. About 177,000 veterans and survivors of veterans are in the system, according to VA figures.

The VA reports names under a category in gun control regulations known as “adjudicated as a mental defective,” terminology that derives from decades-old laws. Its only criterion is whether somebody has been appointed a fiduciary.

More than half of the names on the VA list are of people 80 or older, often suffering from dementia, a reasonable criterion for prohibiting gun ownership.

But the category also includes anybody found by a “court, board, commission or other lawful authority” to be lacking “the mental capacity to contract or manage his own affairs” for a wide variety of reasons.

The agency’s efforts have been criticized by a variety of groups.

Rosen, the Yale psychiatrist, said some veterans may avoid seeking help for mental health problems out of fear that they would be required to give up their guns.

Conservative groups have denounced the policy as an excuse to strip veterans of their gun rights.

Republicans have introduced legislation in the last several sessions of Congress to change the policy. The Veterans Second Amendment Protection Act, now under consideration in the House, would require a court to determine that somebody poses a danger before being reported to the background check system.

Social Security would generally report names under the same “mental defective” category. The agency is still figuring out how that definition should be applied, LaVelle said.

About 2.7 million people are now receiving disability payments from Social Security for mental health problems, a potentially higher risk category for gun ownership. An addition 1.5 million have their finances handled by others for a variety of reasons.

The agency has been drafting its policy outside of public view. Even the National Rifle Assn. was unaware of it.

Told about the initiative, the NRA issued a statement from its chief lobbyist, Chris W. Cox, saying: “If the Obama administration attempts to deny millions of law-abiding citizens their constitutional rights by executive fiat, the NRA stands ready to pursue all available avenues to stop them in their tracks.”

Gun rights advocates are unlikely to be the only opponents.

Ari Ne’eman, a member of the National Council on Disability, said the independent federal agency would oppose any policy that used assignment of a representative payee as a basis to take any fundamental right from people with disabilities.

“The rep payee is an extraordinarily broad brush,” he said.

Since 2008, VA beneficiaries have been able to get off the list by filing an appeal and demonstrating that they pose no danger to themselves or others.

But as of April, just nine of 298 appeals have been granted, according to data provided by the VA. Thirteen others were pending, and 44 were withdrawn after the VA overturned its determination of financial incompetence.

Overman is one of the few who decided to appeal.

He is irritable and antisocial, he said, but not dangerous. “I’ve never been suicidal,” he said. “To me that solves nothing.”

More than a year and a half after Overman filed his challenge, the VA lifted its incompetence ruling, allowing his removal from the background check system before the VA ever had to determine whether he should be trusted with a gun.

Overman, who hasn’t worked since leaving the military, said he and a friend are now thinking of opening a gunsmith business.