[Reuters claimed that the guy was a disgruntled Kurd, but the Turkish press calls him “Sheikh” Seyh (Sheikh) Abdurrahman Alagoz.

Abdurrahman and brother Yunus Emre, according to this latest report from Turkey, both went to Syria for military training.  The two brothers had helped Orhan Gönder‘ with the previous bombing of HDPE rally in Diyarbakir.  They were all neighbors in ADIYAMAN.] 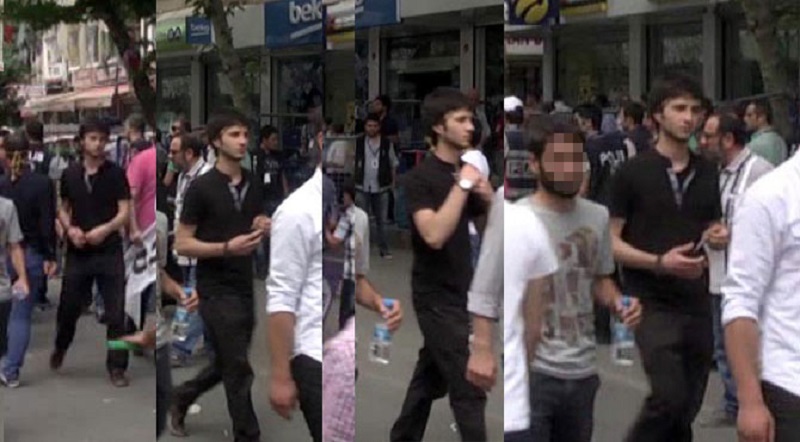 [The question becomes, “False Flag, or genuine Terrorist Attack?”  Considering Turkey’s previous frequent usage of the false flag, to implicate the PKK, makes it easy for outside powers to use the same M.O. in their attacks upon Turkey.  Is Turkey, once again, bombing the Kurds, or is someone pushing civil war upon Turkey (SEE:  The New Silk Road union and the terror game in Turkey )?  Are Turkish bombing runs and police crackdown upon IS militants for real?]

The military wing of the Kurdistan Workers’ Party (PKK) has claimed responsibility for the assassination on Wednesday of two Turkish police officers, describing it as retaliation for a suicide bombing blamed on jihadists that killed 32.

The People’s Defence Forces (HPG) said in a statement on one of its websites that the two police officers were killed at around 6am in the southeastern town of Ceylanpinar for “collaboration with the Daesh gangs” – the Arabic acronym for the Islamic State (IS) group.

Security sources earlier told Reuters the officers were found dead with bullet wounds to the head in the house they shared in Ceylanpinar, on the border with Syria some 160 km (100 miles) east of Suruc, the site of Monday’s suicide bombing.

The bombing, which targeted pro-Kurdish campaigners in Suruc, has been blamed on the IS group, which is locked in heaving fighting with Kurdish forces in northern Syria.

Many of Turkey‘s Kurds and opposition supporters suspect President Recep Tayyip Erdogan and the ruling AKP party of covertly backing IS militants against Kurdish fighters in Syria, something the government has repeatedly denied.

Anti-government protests after Monday’s bombing in Suruc erupted in several cities for a second night on Tuesday, with some of the demonstrators chanting “Murderer Islamic State, collaborator Erdogan and AKP”.

“Although Islamic State has been held responsible for this attack, Turkey’s AKP government, by resisting the taking of effective measures to prevent Islamic State and other reactionary forces, bears the real responsibility,” the opposition Peoples’ Democratic Party (HDP), whose support base is mostly Kurdish, said in a statement.

Turkey’s NATO allies have expressed concern about control of its border with Syria which in parts runs directly parallel with territory controlled by Islamic State. The prospect of conflict spilling onto Turkish soil, embroiling Kurds, Islamist militants and security forces will raise alarm inside and outside Turkey.

On Tuesday, Prime Minister Ahmet Davutoglu rejected accusations that Turkey had tacitly supported the IS group and had unwittingly opened the door to the bombing; but he said initial evidence suggested the Islamist radical group was responsible.

A senior Turkish official told Reuters there was “strong evidence” to suggest the bomber was a 20-year-old man born in the southeastern province of Adiyaman and of Kurdish origin, who had travelled to Syria last year with the help of a group linked to the IS militants.

“He was active in a Syria-linked group supporting the Islamic State. We know that he went to Syria illegally. It was not possible to track him during his time there,” the official said, speaking on condition of anonymity because of the sensitivity of the investigation.

He had links with another alleged bomber who attacked an HDP rally in the mostly Kurdish southeastern city of Diyarbakir days ahead of a June 7 parliamentary election, killing four people and wounding at least 200, the official said.

The Radikal newspaper quoted what it said was the man’s mother saying he was a former student at Adiyaman university who had worked as a painter with his 25-year-old brother before going abroad.

“I don’t know what they were doing abroad, they never said. They were just telling me they were fine,” Semure Alagoz told the newspaper. “I don’t know where he is now. I don’t know if they joined ISIL, if they went for jihad. They are both good kids, they wouldn’t harm anyone.”

According to FRANCE 24’s correspondent in Turkey, Jasper Mortimer, investigators are trying to identify the remains of a possible second bomber, whose body was blown to pieces.

“This might be the corpse of a second female bomber (…), we’ll have to wait until the identification is made,” he said.

Two lawmakers from the HDP submitted separate parliamentary motions on Wednesday naming a 20-year old woman as a suspect, and asking why police had released her from custody last month.

The turmoil comes at a difficult time for Turkey, with a caretaker government in charge while the AKP seeks a junior coalition partner after losing its majority in the June election for the first time in more than a decade.

Since Monday’s bombing, at least 51 people have been arrested in protests in Istanbul alone and police seized more than 200 petrol bombs and a rifle, the governor’s office said.

Anti-government groups have vowed further demonstrations and the HDP has called for supporters to converge on Turkey’s largest city for a mass rally this weekend.