[After admitting to possession of video made by US aircraft, filming terrorists herding innocent people into the building, before the planes bombed it, the Pentagon spokesman tried to escape responsibility for attacking the building full of civilians with the excuse that they were “Bait.”]

Pentagon responds to criticism over civilian deaths in Mosul blast 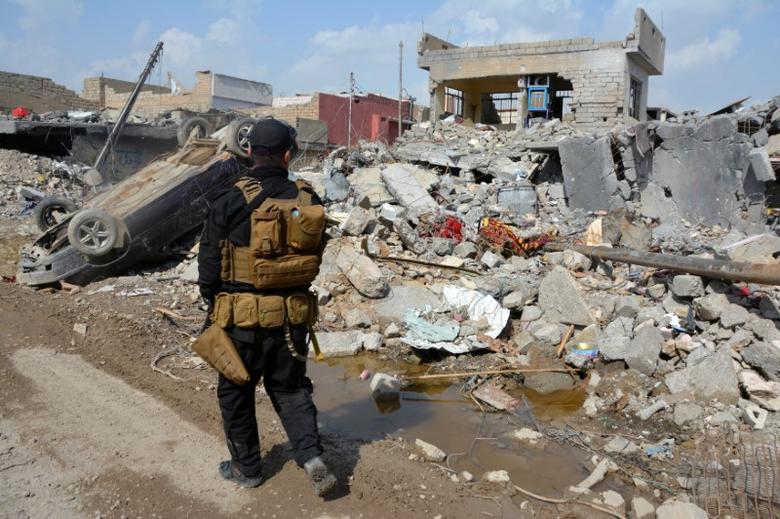 A member of the Counter Terrorism Service (CTS) walks at the site after an air strike attack against Islamic State triggered a massive explosion in Mosul, Iraq March 29, 2017. REUTERS/Stringer
By Idrees Ali | WASHINGTON

The Pentagon on Thursday said it would soon release a video showing Islamic State militants herding civilians into a building in the Iraqi city of Mosul and then firing from it, the U.S. military’s latest response to an outcry over a separate explosion thought to have killed scores of civilians.

The U.S. military has acknowledged that the U.S.-led coalition probably had a role in the March 17 explosion, but said Islamic State also could be to blame.

Local officials and eyewitnesses have said as many as 240 people may have died in the Al-Jadida district when a blast made a building collapse, burying families inside.

Rights group Amnesty International and Pope Francis have both called for better protection for civilians caught in war zones in Iraq.

The Pentagon does not regularly release images or videos from operations. However, it has had to do so once already this month after it denied striking a mosque in Syria, releasing an aerial image to show the mosque was intact. That incident is under investigation.

A spokesman for the U.S-led coalition fighting Islamic State told reporters on Thursday he was working to declassify a video showing militants hiding civilians in a building in west Mosul to “bait the coalition to attack.”

“What was see now is not the use of civilians as human shields … For the first time we caught this on video yesterday as armed ISIS fighters forced civilians into a building, killing one who resisted and then used that building as a fighting position against the (Counter Terrorism Service),” Colonel Joseph Scrocca said. He was using an acronym for Islamic State.

Scrocca said Islamic State tactics have led to adjustments in procedures, adding that about 1,000 Islamic State fighters remained in west Mosul, but did not give details on these changes. He added than an in-depth investigation into the strikes had been opened on March 17.

On Tuesday, Lieutenant General Stephen Townsend, the senior U.S. commander in Iraq, told reporters by teleconference it was “a little disappointing” that questions during the briefing focused on U.S.-led air strikes.

“ISIS is slaughtering Iraqis and Syrians on a daily basis. ISIS is cutting off heads. ISIS is shooting people,” he said.

Pope Francis on Wednesday said it was “imperative and urgent” to protect civilians in Iraq.

At his weekly general audience in St. Peter’s Square, Francis said he was “concerned about civilian populations trapped in the neighborhoods of western Mosul”.