Salvini, the head of Italy’s right-wing League party, has positioned himself at the forefront of a growing movement of nationalist leaders seeking to free the European Union’s 28 nations from what he called Brussels’ “illegal occupation.”

He pledged to close Europe’s borders to migrants if the League wins not just the most votes of any party in Italy, but also of Europe.

Salvini was joined by 10 other nationalist leaders, including include far-right leaders Marine Le Pen of France’s National Rally party and Joerg Meuthen of the Alternative for Germany party. It was a major tour de force for the expanding movement ahead of the May 23-26 vote that will take place in all 28 EU nations.

Still, most of the tens of thousands of supporters that packed the square outside the central Duomo cathedral in Milan were there for Salvini. League flags filled the square, with a smattering of national flags from other nations.

A short distance away, some 2,000 protesters marched to protest the right-wing gathering. 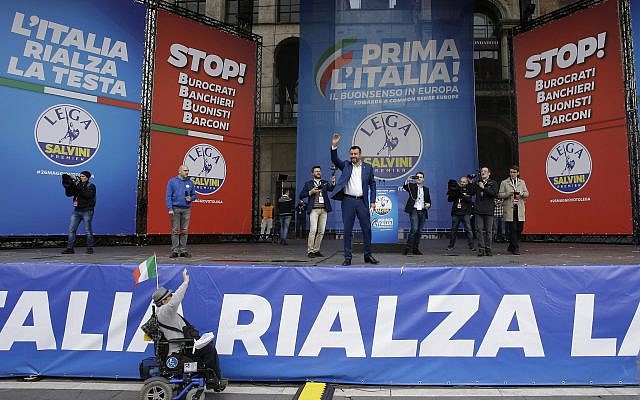 Italy’s Interior Minister Matteo Salvini, who is leader of The League party, salutes as he arrives at a rally with leaders of other European nationalist parties, ahead of the May 23-26 European Parliamentary elections, in Milan, Italy, May 18, 2019. (AP Photo/Luca Bruno)

In front of the Duomo, Salvini railed against unchecked migration and decried Islam, saying it mistreated women. He said Turkey would never be a part of Europe and rejected the label of extremists for the leaders with him.

The far-right and populist leaders in Milan are making one of the strongest challenges to the European status quo in decades, united under an anti-migrant, anti-Islam, anti-bureaucracy banner.

“It is an historic moment important enough to free the continent from the illegal occupation organized by Brussels for many years,” Salvini said.

Closing the rally, Salvini clutched a rosary, entrusting his victory to Europe’s patron saints as he looked up at a statue of the Virgin Mary atop the Duomo. When he did the same thing before last year’s national election, his flaunting of a religious object was roundly criticized as inappropriate in the predominantly Roman Catholic country. 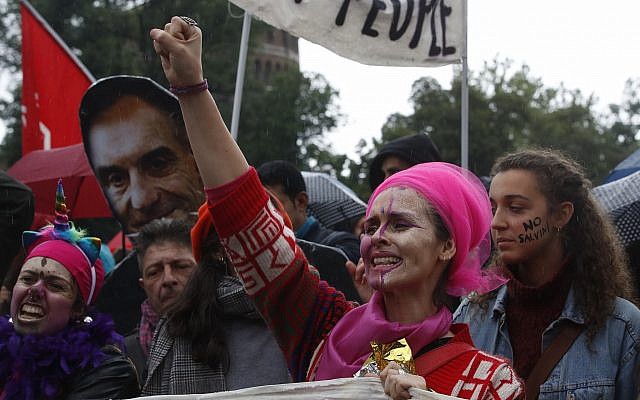 People attend a protest to oppose a rally organized by League leader Matteo Salvini, with leaders of other European nationalist parties, ahead of the May 23-26 European Parliamentary elections, in Milan, Italy, May 18, 2019. Antonio Calanni/AP)

Notably absent Saturday was the leader of Austria’s anti-immigrant Freedom Party, Heinz Christian Strache, who stayed in Vienna to resign as vice chancellor after two German newspapers showed video of him offering government contracts to a potential Russian benefactor.

Despite the political setback for a key member of the Europe of Nations and Freedom parliamentary group, Le Pen predicted it “will perform a historic feat, moving from the 8th place in Europe to third or maybe second” among major political groups in the European Parliament.

Speaking to reporters before the rally, Le Pen called Strache’s predicament a domestic matter, but expressed surprise “that this video that seems two years old is coming out today, a few days before the election.”

She said the movement was united “in our conception of cooperation in Europe, our shared desire to protect our citizens, our common refusal to see our country being subjected to the submergence of migration.

“The fundamental fight we are waging is a commitment against totalitarianism, globalization and Islamism, to which the European Union is responding, respectively, through accession and complacency,” she said. 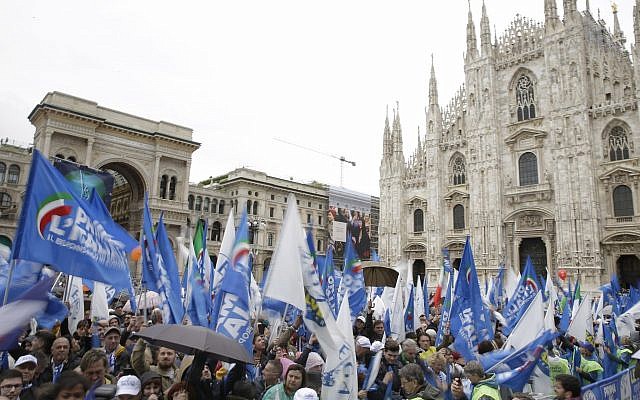 People attend a rally organized by League leader Matteo Salvini, with leaders of other European nationalist parties, ahead of the May 23-26 European Parliamentary elections, in Milan, Italy, May 18, 2019. (Luca Bruno/AP)

The populist and far-right party leaders want to decentralize some EU policymaking, including for trade, agriculture and banking, while tightening immigration laws. Most share common views over immigration and want some powers to be returned to the member states’ capitals, but clash on other economic and social policies.

An analysis by the London-based Teneo consultancy forecasts that Europe’s two traditional center-right and center-left political groups will be weakened in the May vote, falling short of the 50% threshold of support for the first time. But Teneo said that result will mostly increase the influence of other centrist parties more than that of the nationalists.