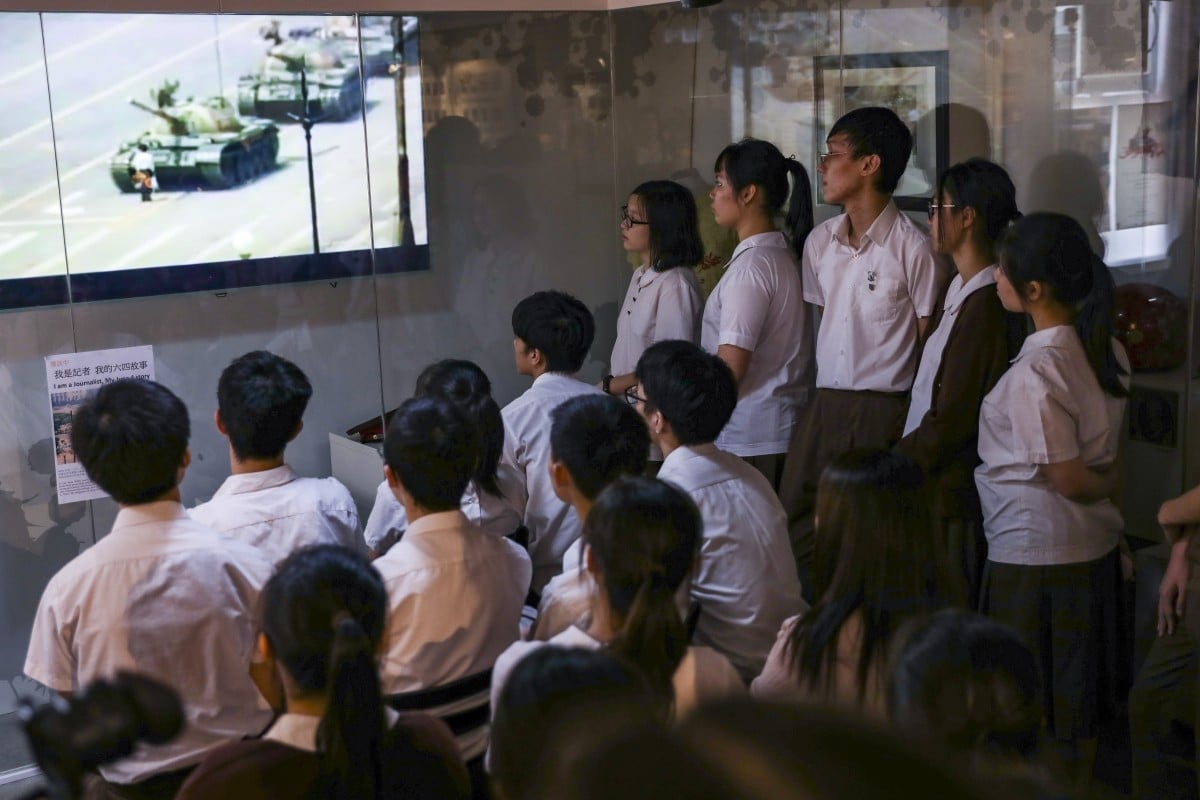 Students visit the June 4 Museum in Mong Kok on Monday ahead of the 30th anniversary of Tiananmen Square crackdown. Photo: Nora Tam

Hong Kong is bracing for a momentous June 4 commemoration, with as many as 180,000 people expected for a candlelight vigil, calls for student localists to return to the rallies, and a new Tiananmen movement museum flooded with visitors.

Organisers expected a large turnout for two reasons – past and present: the 30th anniversary of Beijing’s military crackdown on student protesters in
Tiananmen Square

and the current controversy over a proposed bill that would allow Hong Kong to hand over fugitives to mainland China and other jurisdictions with which it has no extradition deal.

“We expect the turnout to match our historical peak levels,” said Lee Cheuk-yan, secretary for the Hong Kong Alliance in Support of Patriotic Democratic Movements of China, the group that has organised
the annual vigil
in Hong Kong since 1990.

According to the alliance, the largest turnouts came in 2012 and 2014, when at least 180,000 people gathered to mourn the victims of Tiananmen and call for democracy in mainland China.

Some local student leaders continued to call for a boycott, as they had in recent years when resentment against the mainland was running strong.

But Lee remained optimistic about the turnout, saying the alliance and student groups still shared the common goal of achieving justice for the victims and an end to Beijing’s one-party rule.

In a media standup on Tuesday morning, Chief Executive Carrie Lam Cheng Yuet-ngor sidestepped questions on whether she would inform Beijing of calls from Hongkongers to reverse the central government’s vindication of the June 4 crackdown.

“Today is a memorable day for many people. For the SAR government, it shows that Hong Kong is a very free place,” Lam said.

“I hope any public gathering today can be conducted in a quiet and orderly manner.”

She also said the government respects people’s views “on a particular historic incident”.
Hundreds of petitions, meanwhile, have circulated online – launched mainly by alumni of secondary schools and universities – calling on Hongkongers to join a June 9 march against the government’s
extradition proposal

“People still remember and feel strongly about what happened 30 years ago,” Lee said.

“And the bill reminds people that we should fight against the regime for Hong Kong, which essentially echoes the dissatisfaction against Beijing’s suppression 30 years ago.” Visitors at the June 4 Museum in Mong Kok on Monday. Photo: Nora Tam

The results of a survey released on Monday by the University of Hong Kong showed that more than 60 per cent of the 1,013 Hongkongers polled believed their actions helped push democracy on the mainland forward. The result was 6 percentage points higher than last year, according to the university’s Public Opinion Programme.

In recent days, the June 4 Museum, which is operated by the alliance, has been swamped with visitors – including many from the mainland.

Xu Hao, a 32-year-old construction worker from Sichuan province, flew in for the commemoration on June 1 and made a trip to the museum.

“This is my first time in Hong Kong,” Xu said. “I learned more about June 4 last year, and from the information online, I got to know the alliance, the museum and the vigil.” 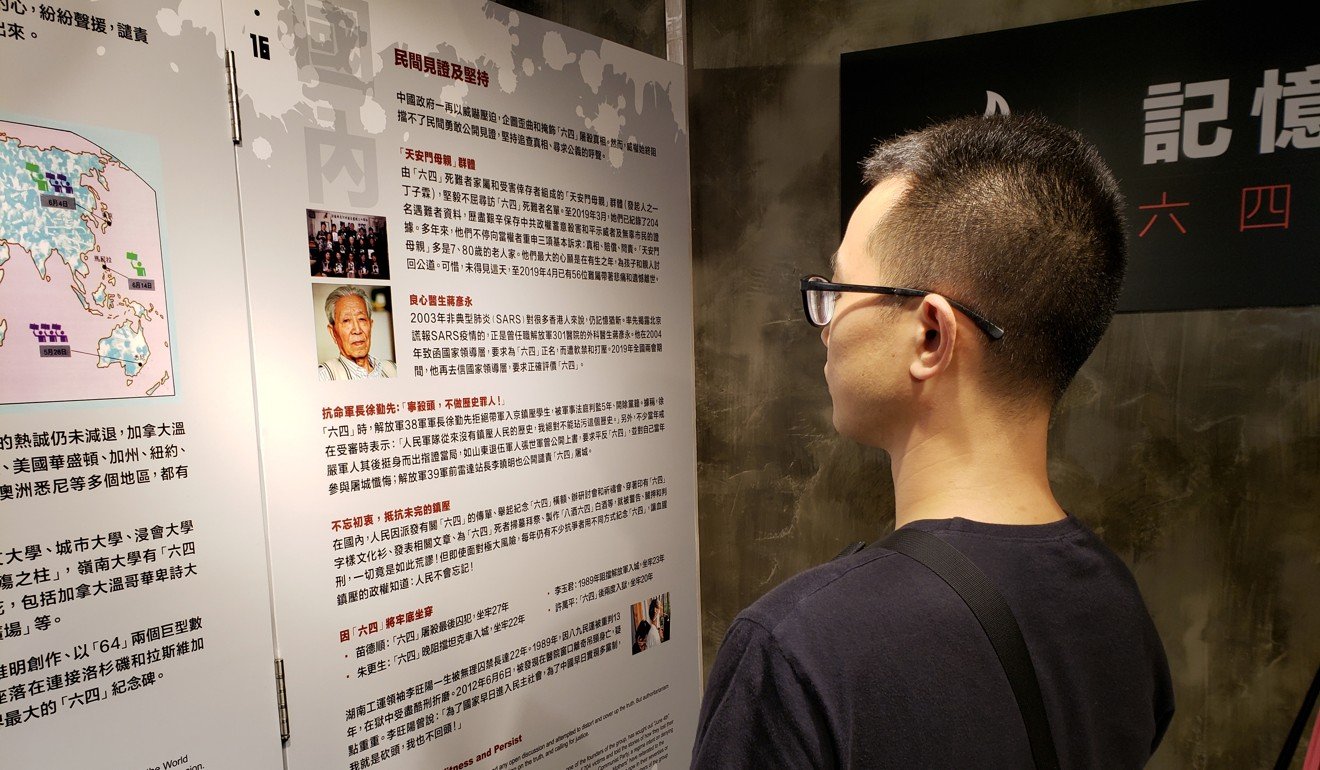 Xu Hao, 32, flew from Sichuan to visit the June 4 Museum and attend the candlelight vigil. He said it was his first visit to Hong Kong. Photo: Su Xinqi

On Monday, Xu held a shirt showing the Goddess of Democracy that he bought as a souvenir from the museum and said he was touched by how Hongkongers stood up for the protesters in Beijing in 1989.

“I do worry that such commemorations will no longer be allowed in Hong Kong in the future, because even under the ‘one country, two systems’ principle, Hong Kong is increasingly similar to mainland China,” Xu said, referring to the framework under which Beijing governs the city.

He was also pessimistic about any June 4 tributes on the mainland.

Many things will fade away as time passes if we continue to maintain the status quoXu Hao, 32, a mainland construction worker who arrived for the vigil

“Many things will fade away as time passes if we continue to maintain the status quo,” Xu said.

He added that he felt uncomfortable about what he called the government’s suppression of free thought after he had learned more about the world outside.

“I hope the younger generation, and people in places like Hong Kong, where all this information is accessible, can work together to preserve and promote the memories [of June 4],” he said.

might be coming the museum’s way, particularly if the extradition bill was passed and politically sensitive issues like June 4 became taboo subjects.

The art of getting Tiananmen Square crackdown onto Chinese social media

Fire services were recently called to the museum after a report of leaking gas was filed – although the museum did not have any gas pipes.

“We believe it’s a false report but we have to come and check,” a firefighter told a Post reporter at the scene.

It was not the first act of intimidation against the museum, which was forced to be relocate from Tsim Sha Tsui after a series of disputes with the building’s owners over its operations.

Twenty days before the opening at the new location, the museum’s door was broken and the power system was damaged. A week later, places near the museum had walls smudged with faeces. Protesters who declined to disclose their identities accused the museum of violating the building’s usage guidelines. Firefighters arrive at the June 4 Museum on Monday after receiving a report of gas leakage. Photo: Nora Tam

On the museum’s opening day, fire services were called and groups of men in black outfits gathered outside, claiming that they were there to “sweep tombs”.

“In the past, people who didn’t like us would try to push us out by legal means. But now, the harassment has reached an unlawful and even criminal level,” Tsoi said.

What became of Tiananmen Square dissidents after crackdown?
Still, Tsoi was determined to keep
the museum running

“Just like the candlelight vigil, the museum is a significant political banner of Hong Kong, which on one hand makes it difficult for those in power to cleanse the memories of June 4, and on the other hand, reflects the uniqueness of ‘one country, two systems’,” Tsoi said.