The White House is closely monitoring a situation described by an administration official as a “congregation of Chinese forces on Hong Kong’s border,” according to a report Tuesday.

The reason for the buildup, which includes the Chinese military or armed police, was not clear but came amid violent protests in the region, Bloomberg reported.

Chinese mainland government claimed the violence was a “creation of the US,” an allegation the administration official denied.

The developments come as President Trump attempts to iron out a trade deal with China and just as the two nations resumed negotiations in Shanghai.

Protests began eight weeks ago when the city-state’s executive, Carrie Lam, tried to win passage of a law allowing extraditions to the mainland.

Secretary of State Mike Pompeo urged the Chinese to “do the right thing” in managing the protests that have seen tear gas deployed by police. Meanwhile, supporters have gathered outside a court in Hong Kong ahead of a court appearance by more than 40 protesters who have been charged with rioting. 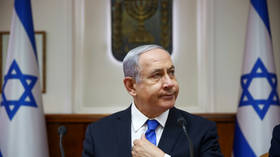 ©  Reuters / Oded Balilty
Never one to mince his words, Prime Minister Benjamin Netanyahu declared that Israel is the sole force fending off a radical Islamic takeover of the Middle East, arguing Tel Aviv is an indispensable defender of the entire region.

Netanyahu shared this insight with a delegation of Arab journalists and bloggers on a visit to Israel on Tuesday.

“I have told them one thing I believe in: the only force that prevents the collapse of the middle east from within it is Israel,” the prime minister said in a Facebook post quoting his remarks, adding “without Israel, the middle east would collapse under the yoke of the forces of Islamic extremism.”

Though the PM’s post only said the attending journalists had come from nations that “do not maintain any diplomatic relations with Israel,” a Knesset press release said that the visiting media figures came from Saudi Arabia, Iraq, Jordan, the United Arab Emirates and Egypt.

The prime minister has previously made overtures to some of Israel’s Arab neighbors, telling an audience of diplomats in Israel last year that Tel Aviv was making “gradual normalization with leading countries in the Arab world,” particularly as a result of the 2015 nuclear accord signed between Iran and world powers, which Israel and Arab states like Saudi Arabia have slammed as a “bad deal.” Tuesday’s media visit appears to be another step in that process of normalization. Netanyahu also said some of the journalists “have expressed their desire for the Arab public to recognize the state of Israel,” and offered to make additional visits to strengthen relations, while the Knesset release quoted one delegate as describing the country as a “dreamland.”