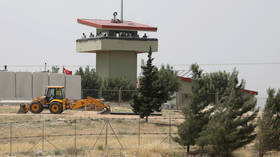 FILE PHOTO: Turkish soldiers stand on a watchtower at the Atmeh crossing on the Syrian-Turkish border. ©REUTERS / Khalil Ashawi

The Turkish Defense Ministry has condemned Syria for attacking its convoy in the Syrian province of Idlib. Damascus said the vehicles were transporting weapons and ammo to “terrorist forces.”

Ankara said three people were killed and 12 others injured on Monday after the Syrian airstrike, which targeted a Turkish military convoy travelling between two observation points in northern Syria. The statement said all victims were civilians, without explaining how they were involved in a military operation.

Ankara said the attack violated the agreement between Russia, Turkey and Iran, which paved the way to a relative de-escalation in the protracted war in Syria, the Turkish news agency Anadolu reported.

Idlib province is the last major part of Syria largely controlled by various armed groups, some of them hardcore jihadists. On request from Russia, the Syrian government agreed not to use force to retake the region to avoid casualties among civilians, who have blood ties with Turkey.

Ankara is supposed to prevent hostilities from reigniting, with a series of observation posts spread along the provincial border to monitor the situation. The plan however never fully worked, with regular flare-ups happening between various armed groups and the Syrian Arab Army.

The nature of the attacked convoy is perceived differently by the Syrian side, however. The Syrian news agency SANA said it was carrying weapons and ammunition to “terrorist forces” in the town of Khan Sheikhoun. It’s located in the southern part of Idlib province on a highway connecting the cities of Aleppo and Hama.

Lately there has been heavy fighting near Khan Sheikhoun between Damascus forces and the group controlling the city, predominantly the Islamist group Hayat Tahrir al-Sham (HTC), formerly known as Nusra Front.