France’s human rightism dies hard despite cost to the region

It is high time for French diplomacy to renounce the dogma of pseudo-humanitarian interference and “Human Rightism” that has not served the interests of the countries it has targeted. The issue of defending human rights and democracy, especially in the Middle East and North Africa, has been enshrined as dogma by Western countries that like to define themselves as guardians of the “free world.”

During the Cold War, this question was used as a formidable weapon to bring down the Soviet Union, as acknowledged in his memoirs by French sociologist Raymond Aron. In this ideological aspect of the global war waged by the United States and the Soviet Union, French diplomacy was not fully involved in what would become, after the collapse of communism, the West’s main weapon against all states qualified as “recalcitrant.”

Until now, the type of international relations championed by French diplomacy was based on recognition of the sovereign state as the central actor. This was the pillar on which the United Nations was created after World War II. French diplomacy did not recognise regimes but states. After all, isn’t the first role of a state to defend its interests?

Some dominant circles, probably inspired by the myth of “the End of History” so dear to the American ideologist Francis Fukuyama and understood by them as synonymous with universal triumph of liberalism, believe in the mission of the West: to convert the rest of humanity to the Western democratic model reduced to the dogma of individualism, erasing governments for the benefit of markets, unelected NGOs and perceiving media as a business venture rather than a democratic counterbalance.

We have seen the disastrous effects of this human rightist ideology, championed by France in the Middle East and North Africa during the last three decades.

All means were good to destabilise, under the pretence of defending human rights and democracy, this very sensitive and strategic region of the world, even by joining forces with the most reactionary and anti-democratic governments and movements in the region, such as political Islam represented by the Muslim Brotherhood and sponsored by Turkey and Qatar.

Despite the desolation, the terror and the bloodshed that this posture, or should I say this ideological imposture, has sown, these liberal apprentice wizards in Europe and the United States refuse to admit their mistakes and defeat. They are preparing to redouble their ferocity, always in the name of the same pretence that is contrary to the flow of history and to their own national interests.

We can see their masquerade happening in Libya, where France supports a pseudo-legitimate government in Tripoli, defended on all fronts by Islamist militias (always the Muslim Brotherhood and its sponsors) and gangs of traffickers of all kinds, all in the name of “democracy” and human rights.

These catastrophes make you wonder if this type of diplomacy is geopolitical myopia or a planned strategy to destroy any idea of ​​a development-focused state that meets the fundamental demands of its people, the only type apt to defend human rights in their entirety.

One remembers the strategy and campaign of destabilisation of the MENA region aggressively pursued by Reporters without Borders and funded by both the Quai d’Orsay and the US State Department, to promote free press in the world. The former director of this NGO is Robert Menard, who is today very close to the French extreme right, which is engaged in a veritable witch hunt against immigrants and Muslims.

Former French Minister of Justice Robert Badinter, who was responsible for abolishing the death penalty in France, despite the opposition of the majority of French citizens, found the right words to denounce the duplicity of France’s Human Rightist diplomacy: “When France prides itself on being the motherland of human rights, it is just a figure of speech; France is the home of the declaration of human rights. To go further than that is a matter of historical blindness.”

In a famous article published by Le Monde diplomatique (December 2000), Hubert Vedrine, former adviser to former French President Francois Mitterrand and French foreign minister during the period of co-rule between the socialists and the neo-Gaullists (1997-2002), was the one who gave perhaps the best definition of this new conception of a “Human Rightist” diplomacy, which, of course, he opposed. For his stance, Vedrine drew the fire of the self-proclaimed NGOs championing this new diplomatic and democratic morality.

“Since becoming minister of Foreign Affairs, I have been repeatedly forced to distance myself from an emerging new ‘doxa’ in international relations,” he wrote.

This new dogma, or “doxa” as he called it, was massively defended and spread by the United States and the European Union, including France, through the creation and funding of so-called democracy-exporting NGOs, and is based on the premise that “states are monsters cold, opaque and repressive; realism is cynicism and international relations are the domain of choice; the reason of state is always hateful; History no longer counts and we are in an entirely new world where we must privilege “civil society” at the national and international levels. Anything that constrains and shrinks states — markets, public opinion, media, judges, NGOs — is good.”

We have seen, with the emergence of the ill-named “Arab spring” and coloured revolutions, where this “constructive”-chaos-generating doxa can lead. In this context, Ahmed Bensaada’s excellent book “Arabesque Americaine: Le role des Etats-Unies dans les revoltes de la rue arabe” (“American Arabesque: The Role of the United States in the Arab Street Revolts”) is a must-read to understand the harmful extent of this disastrous diplomacy that reached its peak under the Sarkozy and Hollande presidencies, especially in Libya and Syria.

A doctor in physics, Bensaada is also an Algerian political scientist living in Montreal. His remarkable investigation was published in Brussels and Algiers.

The arrival at the Elysee Palace of Emmanuel Macron, a creation of the socialist Francois Hollande who escaped his creator, initially sparked hope that this moralising posture would give way to realpolitik in French diplomacy. Two years later, however, there was disillusionment. Despite a slight change in narrative, the same past practices under his two predecessors have been maintained.

It is high time for French diplomacy to renounce the dogma of pseudo-humanitarian interference and “Human Rightism” that has not served the interests of the countries it has targeted nor its own interests..

Majed Nehme is a Syrian-French journalist in Paris. 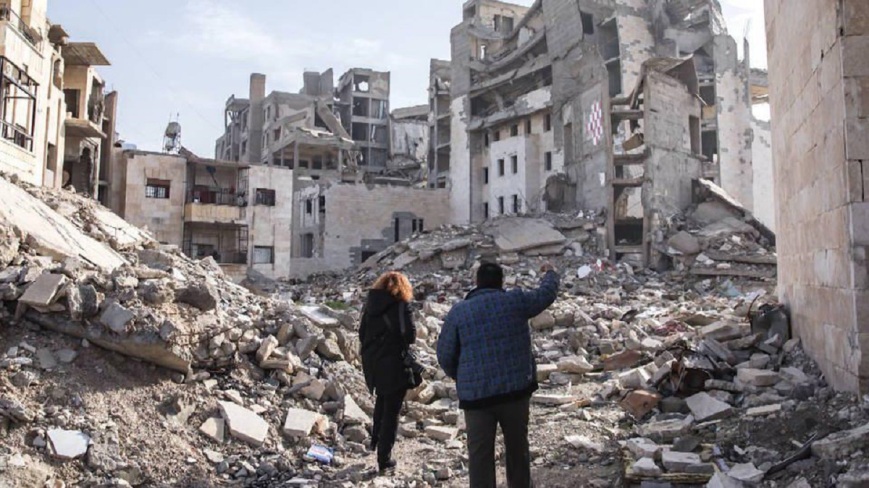 Rhetoric versus Reality: How the ‘most precise air campaign in history’ left Raqqa the most destroyed city in modern times

Thousands of Hong Kong protesters marching to the United States consulate Sunday sang the U.S. national anthem and called on President Trump to “liberate” the Chinese-controlled territory as police looked on, Reuters reports.

Why it matters: This is the latest in a series of weeks-long demonstrations that have plunged the Asian financial hub into the worst crisis for decades. The protests show no sign of abating, despite Hong Kong leader Carrie Lam saying on Wednesday that she was formally withdrawing a bill that would have seen citizens extradited to mainland China — a key demand of protesters.

The big picture: Protesters say the announcement of the bill’s withdrawal was “too little, too late” and that several of their key demands had not been met.

“Afghanistan will never find peace until either the Afghan Taliban (reconstituted in 2003 as the ‘neo-Taliban’) are once again destroyed, or until the second Afghan Civil War is fought-out and won.  The Taliban of Mullah Omar have consistently refused to negotiate with American “puppets”, or with America while the American occupation continues.  Current negotiations w/Taliban reps in Qatar are NOT PEACE TALKS, but instead, are negotiations to remove Western forces from Afghanistan…only then, will the Taliban seriously enter ‘peace talks.’“]

BY JOHN BOWDEN AND MORGAN CHALFANT

President Trump announced Saturday he had canceled a planned secret meeting with leaders of the Taliban and Afghanistan’s president at Camp David.

Trump also said he had called off negotiations with the insurgent group after Taliban leadership claimed credit for a deadly attack in Kabul.

The announcement came days before the 18th anniversary of the September 11th terrorist attacks.

In a series of tweets, the president condemned Taliban commanders for an attack in the Afghan capital that killed 11 civilians and a U.S. service member and questioned whether the leaders of the militant group could negotiate a “meaningful” peace agreement.

Trump said that the Taliban had admitted to the suicide car bombing “in order to build false leverage” and that he had called off negotiations with the Afghan insurgent group as a result, scuttling negotiations when the two sides appeared close to reaching a deal. It was not immediately clear if the president’s tweets would permanently stop negotiations.

“Unbeknownst to almost everyone, the major Taliban leaders and, separately, the President of Afghanistan, were going to secretly meet with me at Camp David on Sunday. They were coming to the United States tonight. Unfortunately, in order to build false leverage, they admitted to an attack in Kabul that killed one of our great great soldiers, and 11 other people,” Trump tweeted.

“I immediately cancelled the meeting and called off peace negotiations. What kind of people would kill so many in order to seemingly strengthen their bargaining position?” he asked.

“They didn’t, they only made it worse! If they cannot agree to a ceasefire during these very important peace talks, and would even kill 12 innocent people, then they probably don’t have the power to negotiate a meaningful agreement anyway. How many more decades are they willing to fight?” Trump finished.

Unbeknownst to almost everyone, the major Taliban leaders and, separately, the President of Afghanistan, were going to secretly meet with me at Camp David on Sunday. They were coming to the United States tonight. Unfortunately, in order to build false leverage, they admitted to..

….only made it worse! If they cannot agree to a ceasefire during these very important peace talks, and would even kill 12 innocent people, then they probably don’t have the power to negotiate a meaningful agreement anyway. How many more decades are they willing to fight?

The White House has not provided more information about the president’s tweets in response to a request from The Hill. The details surrounding the meeting referenced by Trump were unclear.

The Trump administration has been negotiating for months with Taliban leaders from the group’s political office in Doha, Qatar, despite the group’s refusal to engage directly with the Afghan government, which it views as a U.S. puppet.

A spokesperson for the militant group took credit for a Monday bombing in Kabul that killed 12 people in an interview with The Associated Press, claiming that it gave the group a stronger bargaining position.

U.S. envoy Zalmay Khalilzad announced earlier this week that the Trump administration had reached an agreement “in principle” to shutter several bases and withdraw 5,000 troops from the country within about five months in exchange for a peace deal with the Taliban.

Trump campaigned on withdrawing U.S. troops from Afghanistan during 2016 to end America’s longest war, but has faced hurdles in fulfilling that promise.

Military leaders have argued for the need or a continued presence in Afghanistan, where the United States currently has roughly 14,000 troops. Trump has also faced pressure from his Republican allies on Capitol Hill, like Sen. Lindsey Graham (R-S.C.), who have warned against a full withdrawal from the worn-torn country.

Trump said in late August that he planned to withdraw a substantial number of troops from Afghanistan but leave a presence of 8,600 service members.

Trump was asked about the status of negotiations with the Taliban and whether he was ready to sign onto an agreement on Wednesday. The president said negotiations were continuing and that “we’re going to see what happens.

“We’re going to be talking to them.  We’re continuing to talk.  We’ve been there 19 years,” Trump told reporters Wednesday afternoon during an event announcing grants to help states fight the opioids crisis.