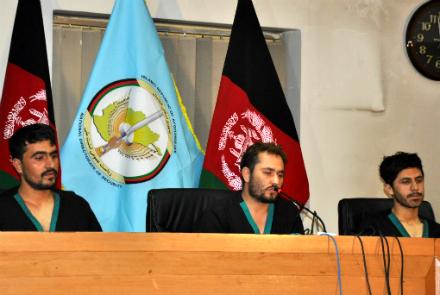 The National Directorate of Security (NDS) on Thursday said it has dismantled a three-member key Daesh terror network in Kabul city which is involved of plotting deadly attacks against the country in recent years.

“This network is one of the most dangerous terror networks of Daesh group which played an active role in at least 29 deadly attacks in Kabul city,” the NDS said in a statement on Thursday.

Among those arrested is Mohammad Sharif whose alias names are (Ajmal, Naser, and Jaffar) who in cooperation with Abdul Wahid coordinated at least 29 suicide and terrorist attacks in Kabul city, the statement said.

“The third individual is named Saber Khan who after being recruited by Daesh opened a shop in ‘Bush Bazar’ where he was providing military equipment and uniform to those plotting suicide attacks in Kabul city,” said the NDS.

According to the NDS, Saber Khan was also sheltering suicide attackers of Daesh and their transfer from Nangarhar to Kabul.

4.            Transferring a suicide attacker in Shashdarak area of Kabul and launching an attack on the journalists

11.          Plotting attack on employees of the ministry of Hajj and pilgrimage affairs in Baraki square

13.          Plotting attack on the camp of protesting female candidates

14.          Plotting attack on the diplomates of the ministry of foreign affairs

16.          Plotting suicide attack on protestors near the election commission