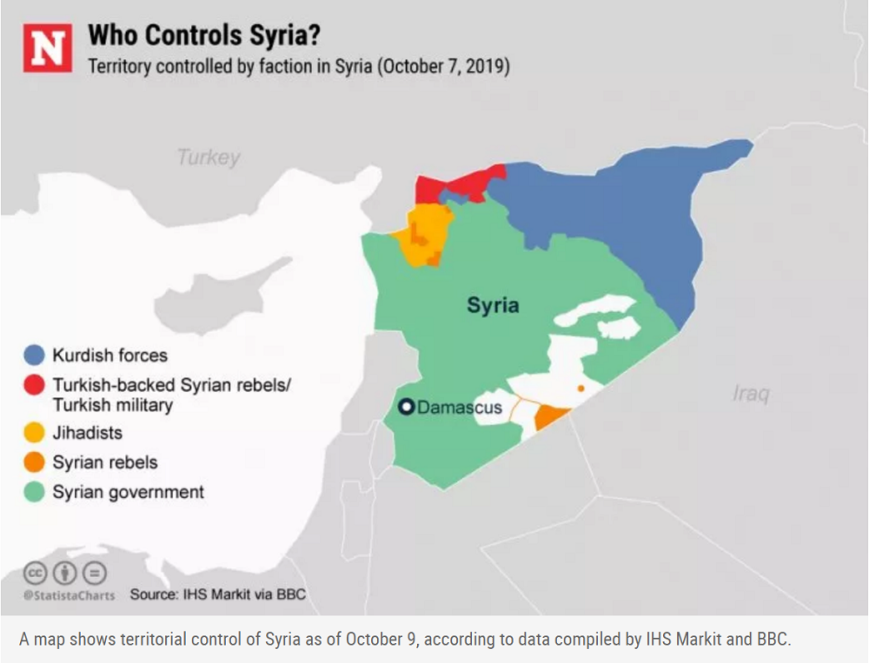 Acontingent of U.S. Special Forces was caught up in Turkish shelling against U.S.-backed Kurdish positions in northern Syria, days after President Donald Trump told his Turkish counterpart he would withdraw U.S. troops from certain positions in the area. A senior Pentagon official said shelling by the Turkish forces was so heavy that the U.S. personnel considered firing back in self-defense.

Newsweek has learned through both an Iraqi Kurdish intelligence official and the senior Pentagon official that Special Forces operating on Mashtenour hill in the majority-Kurdish city of Kobani fell under artillery fire from Turkish forces conducting their so-called “Operation Peace Spring” against Kurdish fighters backed by the U.S. but considered terrorist organizations by Turkey. No injuries have been reported.

Instead of returning fire, the Special Forces withdrew once the shelling had ceased. Newsweek previously reported Wednesday that the current rules of engagement for U.S. forces continue to be centered around self-defense and that no order has been issued by the Pentagon for a complete withdrawal from Syria.

The Pentagon official said that Turkish forces should be aware of U.S. positions “down to the grid.” The official could not specify the exact number of personnel present, but indicated they were “small numbers below company level,” so somewhere between 15 and 100 troops. Newsweek has reached out to the Pentagon for comment on the situation.

The Turkish Defense Ministry issued a statement in response to Newsweek’s report, denying that its military had targeted U.S. forces. The ministry affirmed that “Turkish border outposts south of Suruc came under Dochka and mortar fire from the hills located approximately 1,000 meters southwest of a U.S. observation post.”

“In self-defense, reciprocal fire was opened on the terrorist positions of the attack. Turkey did not open fire at the U.S. observation post in any way,” the statement added. “All precautions were taken prior to opening fire in order to prevent any harm to the U.S. base. As a precaution, we ceased fire upon receiving information from the U.S. We firmly reject the claim that U.S. or Coalition forces were fired upon.”

Turkish President Recep Tayyip Erdogan had long warned he would storm the border to establish a so-called “safe zone” and, after the White House announced Sunday that U.S. troops would stand aside, he launched the operation earlier this week.

In its Sunday statement, the White House had said that U.S. troops “will no longer be in the immediate area” as Turkey and allied Syrian rebels commenced their assault. During Friday’s press conference, Joint Chiefs of Staff Chairman Army General Mark Milley said that U.S. personnel were “still co-located” save for “two small outposts” near the border with Turkey. Defense Secretary Mark Esper said 50 Special Forces personnel had been repositioned ahead of the Turkish and allied Syrian rebel assault.

The U.S. first partnered with the largely Kurdish Syrian Democratic Forces in 2015 to battle the Islamic State militant group (ISIS) as the country shifted its support away from an increasingly Islamist opposition seeking the overthrow of Syrian President Bashar al-Assad. The group proved effective in beating back the jihadis, but the U.S.’ decision was opposed by Turkey, a NATO member that has faced off with a decades-long insurgency by Kurdish separatists.

Turkey remains the last major sponsor of the Syrian opposition, made up largely of members of the country’s Syrian Arab majority, and has mobilized up to a thousand fighters from these forces, along with hundreds of its own troops, in order to seize territory currently administered by a majority-Kurdish autonomous administration that spans the country’s north and east. This self-governing entity has not been recognized by Ankara nor the central government in Damascus, which has secured much of the rest of the country’s territory with the help of Russia, Iran and allied militias.

The Pentagon has repeatedly urged Turkey to halt its operations and, though he initially signaled support for Erdogan’s plans following their phone call Sunday, Trump has since threatened to sanction the Turkish economy if the country’s military action did anything “off limits.” While the president has repeatedly called for an end to the costly, “endless wars” launched by his predecessors in the Middle East and beyond, he also warned he may send more troops to Syria if the situation was not resolved.

On Thursday, Trump tweeted that he had “one of three choices: Send in thousands of troops and win Militarily, hit Turkey very hard Financially and with Sanctions, or mediate a deal between Turkey and the Kurds!”