China and Russia sent jets over the seas in northeast Asia on Tuesday in what Japan’s defense minister called a “provocative” and “unacceptable” move as President Biden was visiting the region, a senior administration official confirmed to Axios.

Driving the news: Japan says it scrambled jets as Chinese and Russian planes neared the country’s airspace while Tokyo was hosting the leaders of the Quad group that includes the U.S., Reuters reports.

What they’re saying: “We believe the fact that this action was taken during the Quad summit makes it more provocative than in the past,” Japan’s Defense Minister Nobuo Kishi said during a news conference that was broadcast online,” per Reuters.

The big picture: The military activity signals that the partnership between China and Russia remains intact even as the war in Ukraine continues, the New York Times notes.

[The US GOV already controls the Internet through its domination of all English-speaking corporate news sources throughout the US and the world, either through actual CIA penetration of their news bureaus, or the habitual American mainstream news tendency to “self-censor”, in order to comply with anticipated GOV narratives and desires. Now, it seems, any “foreign news” will be automatically censored by the new entity, in order to eliminate or discredit opinions or news counter to the GOV narrative. Following this mainstream news tendency to please their overlords, it is easy to see the inherent danger as a result, reflected in the current Ukraine war where years of denying and suppressing Russian warnings about implied NATO threats and encroachment upon Russian borders led directly to this conflict. Calling the Ukraine invasion “unprovoked” is lying, considering the fact that the Western side has been trying to provoke this war for several years.]

US is world’s ‘greatest propagator of disinformation’ – Senator

Washington has no right to tell its citizens what the truth is, Rand Paul claims 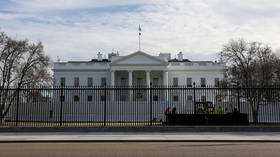 A general view of the White House © AFP / Anna Moneymaker

Due to its long track record of disinformation, the US government has no right to tell the American people what the truth is, Kentucky Senator Rand Paul has stated. He went to list a number of examples of where Washington had lied to its own people, and the rest of the world.

During a Senate hearing on Wednesday, Paul grilled Secretary of Homeland Security Alejandro Mayorkas over the so-called ‘Disinformation Governance Board’ his agency has announced to supposedly help social media platforms filter out ‘fake news.’

He was referring to the controversial and largely discredited report that relied on info from anonymous sources to allege collusion between the Donald Trump campaign and Moscow ahead of the 2016 presidential election in the US.

“If you can’t agree to that, how are we ever going to come to an agreement on what is disinformation, so that you can police it on social media?” Paul wondered.

“Do you know who the greatest propagator of disinformation in the history of the world is? The US government!” he insisted.

In order to back his claim, the Senator mentioned several examples of false information being deliberately spread by Washington over the past decades.

Among them were the so-called Pentagon Papers, which revealed that the US government had been misinforming the public about the scale of its military operations during the Vietnam War. The documents were officially declassified in 2011, but the media had been reporting on them since 1971.

Paul also mentioned “George W. Bush and the weapons of mass destruction,” referring to American claims that Saddam Hussein’s regime had been in possession of WMD, claims that were used by the US to justify the invasion of Iraq in 2003, but were never confirmed by findings on the grounds.

His other example was the Iran–Contra affair, which saw top US officials secretly organizing the sale of weapons to Iran in violation of an arms embargo between 1981 and 1986 in order to obtain money to fund the Contras insurgent group in Nicaragua.

“I mean, think over all the debates and disputes we’ve had over the last 50 years in our country. We work them out by debating them. We don’t work them out by the government being the arbiter,” the Senator said.

“I want you to have nothing to do with speech… You think the American people are so stupid they need you to tell them what the truth is?” Paul added.

The creation of the Disinformation Governance Board was announced in late April. According to the Department of Homeland Security (DHS), the new body would help counter disinformation, which is being spread by “foreign states such as Russia, China and Iran,” and by human traffickers operating on the US-Mexico border, among others.

The DHS gave assurances that it won’t be targeting US citizens. But critics were quick to nickname the board ‘The Ministry of Truth,’ after a fictional organization from George Orwell’s iconic dystopian novel ‘1984’.