Israel Has the West Where They Want Us

In this video, Jonathan Miller surveys part of the aftermath of Israel’s bloodletting operation.The devastation is phenomenal; it is beyond that seen in other wars by severaldegrees.What is different here is the fact that the murderous IDF campaign was depicted by the Western media as a “war,” even though it clearly was not a “war,” by any definition.This was not a war any more than the pogroms of the Warsaw ghettoes were wars.

The entire process of raining-down fire on walled-in ghettoes of civilians, then plowing-under the remains of what were once apartment building and family homes with bulldozers is not warfare, it is wholesale murder and wanton destruction, the likes of which has, thankfully, occurred only rarely in modern history.One of the more infamous of these anti-Semitic pogroms, known simply as “Kristallnacht,” is known as a turning point in German history and the opening act of “the Holocaust.”

What is a Pogrom?[my changes]

“Simply stated, a pogrom is an act of mass violence or mass-murder of a certain group of people. Historically, this term -– Russian for “demolish violently or riot” — has been applied more specifically to the mass killing of the [Semitic] people, perhaps because of the frequency with which pogroms were committed against them. But a pogrom goes well beyond mere killing; a pogrom is much like a riot aimed not only at killing, but also at destroying homes, businesses, and other forms of daily life and culture.

…Businesses were ransacked and looted, homes were destroyed, entire villages would be burned to the ground, and more often than not, people would die at the hands of their aggressors. In the case of the [Palestinians], these pogroms persisted for decades.”

During Kristallnacht 26,000 Jews were arrested and sent to concentration camps.In Operation “cast lead,” 50,000 Palestinian Arabs were removed from their homes, to be removed later to new “refugee camps,” tent cities, hastily erected on the Egyptian side of the Palestinian border by Israeli demands during ceasefire negotiations. 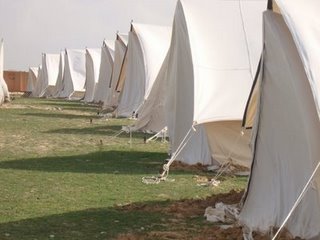 Kristallnacht was blamed on the Jews themselves and was used as justification for all the anti-Semitic moves which followed, just as “cast lead” is reported to be solely the Palestinians’ fault in the Western press and will be used to justify the next moves to disempower Hamas and to transfer all Palestinians to Jordan and Egypt.

Olmert is following a revived Nazi concept of “lebensraum” (living space) today, to re-transplant the Jewish “settlers” (colonists) who are already clamoring to return to Gaza, under protection of the new international forces, no different than the original Nazis who were flowing into Poland to carry-out Goebbels’ plan under cover of Luftwaffe bombers in 1939.The primary difference between the two Nazi regimes is that today, the “free world” stands foursquare behind the murderers and their plans for ethnic cleansing.

The naiveté of world leaders (or their vulnerability to blackmail and extortion) has led them into a partnership with this evil, making our leaders and our press the most effective spokesmen to promote the new holocaust/shoah.The hypocrisy is evident in every word spent defending Israel’s final solution, as the rabid foam of insanity drips from their lips, portraying Arabs and Muslims as “terrorists.”

Israeli/Jewish propagandists are masters of their craft, having crafted their own rhetoric while carefully studying the techniques perfected by the “Master race.”Israelis proudly flaunt their own perfection and innocence as survivors of the purging flames of the Nazi “Holocaust,” while highlighting the imperfections of the Arabs who “besiege” them.By blending truth and lies in a dizzying mixture, until they become indistinguishable, mental fatigue sets in, increasing the effectiveness of the disinformation.Truth no longer resides in the words that are spoken, but dwells more in the realm of the unsaid.

As a direct result of Israeli/American propaganda, the captives of the Gazan ghetto are now the aggressors, justifying the years of inhuman abuse and mass suffering that is rained down upon them.They are our tortured brothers and sisters, even though the Israeli/Western media portrays them as an alien life-forms, somewhere between some sort of retarded beings and dogs.

An international force is being put together to deny these dog-like creatures their inalienable right to self-defense against oppression and foreign occupation. The international “peacekeepers” are preparing to “protect” the occupation forces from the bombardment by “road flares” and to begin a process of transferring Israeli “settlers” and acceptable Palestinians (loyal to Mahmoud Abbas, not to the elected Hamas government) into Gaza, followed by the forced relocation of all Arabs, after an anticipated acceptance of the “two-state solution.”

Jews in Israel and the world over cringe at legitimate comparisons being made between today’s new fascism and that of a previous era, with expectations being, that the current era of censorship of the truth by ADL/AIPAC/WINEP will continue.Jewish-Americans should be more concerned about the eventual repercussions for their own families and countrymen, should Israel succeed in conquering the world by stealth (“By means of deception, thou shalt wage war“), or if anti-Zionists manage to generate a real global resistance movement.

Today’s aftermath of the slaughter is different from Kristallnacht, in that the visual record of the truth survives through the Internet.Instead of marking the beginning of a new era of global fascism, “cast lead” will mark the beginning of the end of the Zionist regime, depending on the tenacity and the commitment of the Palestinian people’s supporters to destroying the official Israeli government’s official lies (Hasbara).

Today is different, if we are willing to do what is necessary to make it different.The “Light of the Nations” (the Truth of God) is not emanating from the little spit of sand known as “Israel” today; it is echoing the Truth down the ages to us today, just the same as it has been since the beginning.It is thanks to the Truth once imparted unto the world by the original “Israel” of God, that we know for absolute certain that everything about the “Israel” today that has been fabricated with Palestinian blood is wrong.

It is wrong to kill children.

It is wrong to commit mass-murder.

It is wrong to rob and steal a people’s means to live, even the land itself.

It is wrong to lie in order to cover-up your previous wrongs, but above all, to cover beforehand the great wrongs that you have planned.