LEBRON JAMES
UNDER FIRE FOR ‘YOU’RE NEXT’ POST
… ‘Disgraceful & Dangerous’

Jen Psaki baselessly and disgracefully racialized the killing in Columbus 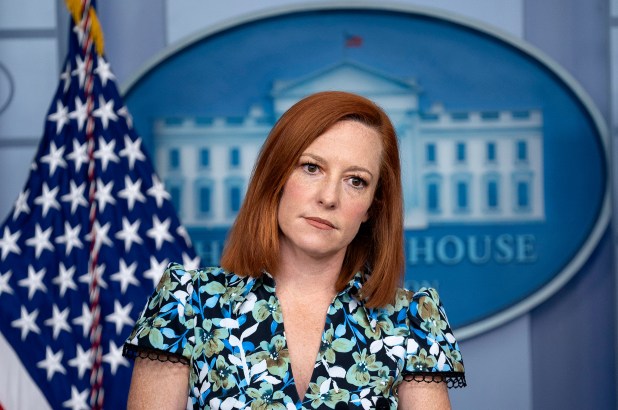 “Believe your own eyes” — that was the prosecutor’s final admonition to the jury in the Derek Chauvin trial. And indeed, the evidence of their own eyes was likely the reason the jury members didn’t accept the defense’s case that there was “reasonable doubt” about Chauvin’s guilt. Instead, they convicted him on all charges.

The same admonition should be governing the public response to the horrible event in Columbus, Ohio, that transpired just as the Chauvin verdict was being announced. But it isn’t.

No less than the press secretary of the president of the United States went before the public Wednesday and all but explicitly suggested what had happened in Ohio was an illegitimate, racist police killing.

Believe your own eyes, Jen Psaki. Watch the body-cam footage that shows 16-year-old Ma’Khia Bryant charging first one fellow teenager, then a second. The second girl was slammed against a car, at which point Bryant began to swing her right arm — with a knife in her hand.

The police officer whose camera recorded the event had told her to “get down,” and she hadn’t done so. He had only a split second to react as she aimed the knife and readied to swing. He fired.

Believe your own eyes. She had a knife. Had she not been stopped, that knife would have gone into the body of the girl on the car. The police officer was witness to a violent act in real time and interceded the only way he could.

At the five-second mark in the video, the officer has gotten out of his car and is asking someone on the street, “What’s going on?” Two seconds — two seconds — later, the first girl being chased by Bryant falls to the ground.

It’s now the 12-second mark. The cop has removed his gun from his holster. At 13 seconds, Bryant’s arm is drawn. At 14, we see Bryant fall to the ground.

What this means is that the officer found himself in the middle of a violent confrontation and had to act . . . within nine seconds.

Count off nine seconds. Out of a car. Asks for information. Suddenly a girl falls in front of him, chased by Bryant and her knife. He tells her to get down before removing his weapon and has it in his hand in time to stop her from stabbing the girl against the car.

I’ve watched the body-cam footage 25 times. I can’t imagine what else the police officer could possibly have done given the urgency of the moment — except allow Bryant to stab the other girl.

My own eyes suggested to me, and to the world, that Chauvin was guilty of something — though it was certainly beyond my knowledge then or now, as I wasn’t on the jury, to know precisely what. Likewise, my eyes say this was a horrible, tragic, terrible event in which a police officer may have saved a life in imminent peril.

And yet this is what Psaki, the spokeswoman for the world’s greatest power and leading democracy, said: “She was a child. We’re thinking of her friends and family in the communities that are hurting and grieving her loss. We know that police violence disproportionately impacts black and Latino people in communities and that black women and girls, like black men and boys, experience higher rates of police violence.”

Who speaks for her and the countless Americans whose lives are saved every day by the intervention of law enforcement? Who will speak out for those who have saved them?

“I truly believe in my heart most white people and black people are awesome people, but we’re so stupid following our politicians, whether they’re Republicans or Democrats, and their only job is, ‘Hey, let’s make these people not like each other.”

This is one of the reddest “red-pill’ statements ever. Charles Barkley really “gets it”

Wow. I gotta tell ya, I think Charles Barkley is inching closer and closer to being a full-blown conservative.

TIRED OF THE ADS? BECOME A PREMIUM USER TODAY!!

As a matter of fact, he’s sharing some pretty heavy stuff about the government that is about as ‘red-pilled’ as you can get.

Barkley has always been a common-sense kinda guy. He’s the type who can see through. the garbage, and speak the truth.

MORE NEWS: Heads Up: George Soros is On The Move Again…He’s Unleashing a $500 Million-Dollar Plan

Remember, Charles was one of the first people to come out really hard against the stupid “defund the police” nonsense.

Charles is calling out our government’s deepest, darkest plot … those of us on the right have always known this and talked about it, but to hear someone like Charles say it out loud, really makes your jaw drop.

So, what to Charles reveal?

He revealed that he believes our government is actively working to keep whites and blacks at each other’s throats and hating one another.

Here’s what he said:

The media can be included in this mix as well.

They do the same thing – which makes sense since they’re basically part of the government, too.

We’re all being played – pitted against one another so that these swampy slimeballs can conduct all their illegal business and we won’t notice.

It’s time for everyone to wake up.

Attn: Wayne Dupree is a free speech champion who works tirelessly to bring you news that the mainstream media ignores.

Many kids separated from relatives at the border have horrific stories to tell, as humanitarian challenge grows

Rep. Alexandria Ocasio-Cortez on Wednesday night slammed the overcrowded conditions for immigrants at the US-Mexican border under President Biden as “inhumane”, “horrifying,” “unnaceptable” and “barbaric.”

She also blamed decades of US foreign policy with countries in neighboring Central America as contributing to the perpetual crisis of desperate residents from poor, violence-torn countries flooding the border.

“The fact that this keeps happening is a political failure of both parties,” Ocasio-Cortez said.

AOC gave a detailed critique on the current border crisis — after being accused of giving Biden a pass after excoriating former President Trump’s border and immigration policies.

During an earlier interview, she criticized people who describe the situation at the border as a “surge” of pushing a “white supremacist” philosophy.

She had visited immigration detention centers in 2019 and decried the conditions under Trump as “concentration camps.”

Ocasio-Cortez said the slow processing and verification system at the border causes a “huge pile up” leading to “inhumane conditions” that “are wrong.”

While claiming Trump’s immigration policies are more harsh than Biden’s, she added, “I don’t want to excuse any of this.”

“We should be doing better by now,” she said.

At one point, she said families who were forcibly separated during the Trump years “are owed reparations. Period.”

She blamed US foreign policy for contributing to the border crisis.

“People don’t want to talk about it but then they want to act like this is brand new every time,” said of the masses overwhelming the border.

While she decried the current conditions at the border, she claimed Biden is trying to solve the problem.

“I’ve been in contact with the Biden Administration personally. What is different is they’re trying to figure out … how to find the resources to end his problem,” AOC said..

She said the border crisis could get worse if the US doesn’t address root causes through its foreign policy and trade and climate policies.

“The volume of these shifts are going to increase as droughts increase,” said Ocasio-Cortez.