A study was conducted in Jordan by Alabdallah, 2005 at the Forensic Labs (SEE:  Chemical characterization of counterfeit captagon tablets seized in Jordan.). After analyzing 124 batches of Captagon seized and analyzed by Gas Chromatography.

His study revealed the absence of fenethylline in all samples analyzed.

Instead of it, GS, MS has detected the presence of the following substances that induced the same effects of fenethylline (see table1) 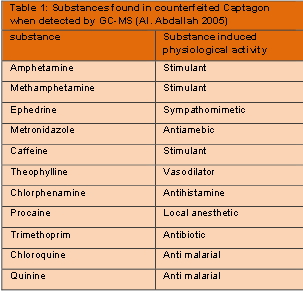 Association of Clinical and Forensic Toxicology

Captagon’s other name is Fenethylline…a combination of d-amphetamine and theophylline…these two new compounds are absorbed into the blood stream, and can now cross the blood brain barrier and become centrally active…Theophylline: Captagon’s “other half” is Theophylline. Theophylline is a chemical of the Xanthine class. The most recognizable Xanthine is Caffeine.

Adderall is defined by the FDA to be a CNS stimulant with a single-entity amphetamine product combining the neutral salts of dextroamphetamine and amphetamine, with the dextro isomer of amphetamine saccharate and d, l-amphetamine aspartate monohydrate…adderall acts to inhibit the reuptake of dopamine.

A prodrug is a medication that is administered in an inactive or less than fully active form, and then it becomes converted to its active form through a normal metabolic process,”

procaine (local anesthetic),  increase of dopamine and serotonin levels in the brain, a vasodilator, and is often coadministered with epinephrine for the purpose of vasoconstriction. Vasoconstriction helps to reduce bleeding  http://en.wikipedia.org/wiki/Procaine

“Not having night goggles, except for some we take off the enemy, is not much of a problem for us because we can sense where al Nusra fighters are, and they tend not to fight at night,” Ali’s son told me.

I asked why the reluctance to fight at night, thinking maybe it had something to do with a religious edict of some sort, but once more I was mistaken.

“No it’s not that, it’s because they are too paranoid and exhausted, from taking captagon and even stronger drugs, to fight at night.”

According the guys I was sitting with, some with more than two years fighting experience with the PFLI, many, if not most, of the Gulf-sponsored jihadists are given bags of pills to enhance their battlefield courage. And it works to a degree. At dawn each day, jihadists take drugs, including large doses of captagon and other widely available drugs. There also are some particularly potent drugs, known locally as “baltcon,” “afoun,” and ”zolm,” as well as opium, heroin, cocaine, and hashish. The main drug routes into the Syrian battle zones, I was advised, run from Pakistan, Afghanistan and Lebanon, with lesser amounts coming via Turkey, Iraq and Jordan. Lebanon’s Bekaa valley apparently produces large amounts of captagon pills for shipment to the Gulf, and now to Syria. Jihadists high on drugs apparently feel invincible, and hostile, and do not fear death. Many are indeed ferocious and fearless fighters during the day, as many media sources have reported. But by nightfall, when the drug wears off, the fighters become exhausted and sometimes are found asleep on the very scene of battle they were fighting from.

“Many of the ‘Gulfies’ are in fact heavily addicted to strong heroin-like drugs. They crave them, and sometimes they even fight with their fellow militiamen to get their ‘fixes.’ We are told by some we capture that sometimes, when one of their comrades is killed, the fallen fighter’s ‘friends’ will descend on his body, not particularly to pray over it, but to rummage his pockets for his drugs.”

In point of fact, in 2011 alone, Lebanese authorities confiscated three amphetamine production labs, in addition to two Captagon-producing labs, which they claim were responsible for sending hundreds of thousands of the pills to the Gulf. The seizure of trucks with captagon in their chassis in Lebanon, and at Beirut airport, shows a growing demand for these products in the Syrian militia market. The UN recently reported that the Middle and Near East are experiencing the majority of drug busts globally.

Al Nusra Front and ISIS—being some of the more extreme “imported jihadists,” as some here call them—claim to be better fighters than Hezbollah, whose units set the fighting skill bar fairly high these days. Some of them claim they have not really started their battle to defeat Hezbollah on its own territory, but will do so when they are ready. But as one PFLI fighter explained, and some of his buddies nodded agreement, only when high on drugs do Qatari/Saudi jihadists exhibit bravery and bravado. Only then do they pose a serious threat, because they ignore normal defensive fighting tactics.

“We know many of these guys quite well. Lots of them were never even religious. There are many who are drug addicts, who get high and lose their fear of dying, so they are dangerous to confront, and they often use strange tactics.”

As the Syrian crisis enters its fourth year, with more jihadists arriving and more militia being formed across the political and religious spectrum, the US intelligence community and congressional sources are now predicting the war will continue for another decade or more. It’s anyone’s guess what the post-Syrian crisis period will bring to this region given the rise of ethno-nationalism along with demands for the return of Sykes-Picot land grabs. There are also growing signs of a cataclysmic intifada in Palestine. When you add to all that US intelligence predictions of the overthrow of two, and possibly three, Gulf monarchies, another Hezbollah-Zionist war, plus the deterioration of the social and religious fabric across the region, the future looks bleak indeed.

Franklin Lamb is a visiting Professor of International Law at the Faculty of Law, Damascus University and volunteers with the Sabra-Shatila Scholarship Program (sssp-lb.com).